Tunisia's Judo Martial Artists Have Their Eyes on Tokyo

In Tunisia, the National Judo Team has begun preparing for the African Judo Championship which is set to take place in Morocco in April. An event that athletes attend in an attempt to qualify for the Olympics.

The Tunisian Judo Federation has organised a training camp in Hammamet where the athletes can train twice a day — with strict coronavirus-prevention measures in place, including mask-wearing and an imposed curfew.

''We are now in a camp at Hammamet for two weeks. Our program is to have a course in Uzbekistan on March 3 and then, we go to Georgia. At the end of March, we will participate in Turkey's grand slam. Next Ramadan, we have a camp program for two weeks in France. Then, African Champions League in Morocco, Grand Slam in Paris, World Championship in Budapest, and then a three week camp in Japan before the Olympic Games in Tokyo.''

Even the Coronavirus Cannot Keep These Athletes Down

With the COVID-19 pandemic in its second wave around the globe, athletes are facing various preparation challenges as they not only navigate sanitary restrictions when training for the Tokyo Summer Olympic Games but also take extra precautions to not get infected with the coronavirus.

Nihel Andoulsi, a member of the team, was one of the unlucky ones.

"I caught coronavirus, so I know what happens when you have this disease. For me, it was a hard deprivation of the African games. It happened to me because of being around people that I didn’t know well.''

With just five months to go till the games are scheduled to begin, the Tunisian National Judo Team continues to train to secure their athletic spot and trip to Japan. 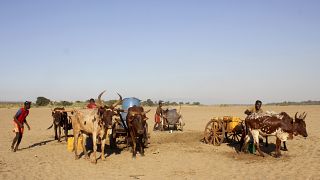