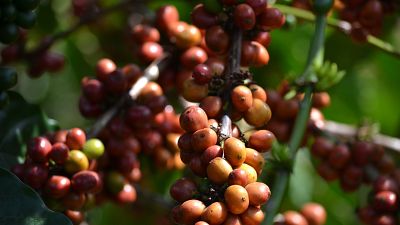 The increase is the highest since 1991 according to Uganda Coffee Development Authority (UCDA), the country’s agency mandated to control and market the crop.

Uganda earned $515.94 million from the exports.

This represents a 22 percent and 18 percent increase in quantity and value respectively.

The improved performance was attributed to an increase in production driven by newly planted coffee trees and favorable weather.

Uganda’s coffee is mostly sold in its raw form. The country produces both Robusta and Arabica coffee.

Much of the crop is grown by smallholder farmers in the central, eastern, and western regions of the country.

On export destinations, Italy maintained its top spot among countries with a high affinity for Ugandan coffee, followed by Germany, Sudan, Belgium, and India.

Europe is the main destination for Uganda’s coffees with a 63 percent import share.

After seeing millions of its coffee trees get decimated by a viral disease in the early 2000s, Uganda’s scientists began breeding new, disease-resistant varieties.

In 2009, the country’s coffee research institute released seven varieties that are resistant to the coffee wilt disease.

In 2017, the institute released three higher-yielding and disease-resistant varieties.

Last year, the institute said it was working on a program to breed drought-resistant coffee plants as one of the ways to mitigate the effects of a changing climate on the industry.

Uganda’s government has set itself an ambitious target to increase exports of the crop to 20 million bags by 2025. Coffee is the country’s main cash crop.