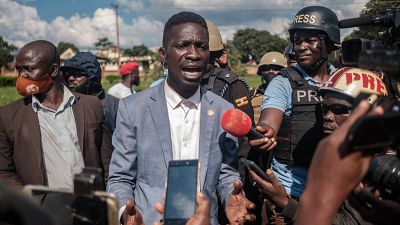 Lawyers for Ugandan opposition leader Bobi Wine filed a challenge in the Supreme Court on Monday against President Yoweri Museveni's victory in last month's election, claiming the poll was rigged.

The 38-year-old singer-turned-lawmaker came a distant second behind veteran leader Museveni in the January 14 vote that followed some of Uganda's worst pre-election bloodshed in years.

Medard Sseggona, one of Wine's lawyers, said "any election Museveni participates in can never be a peaceful election, can never be a free and fair election".

"We want nullification of the election. We do not want (Museveni) participating in any future election," Sseggona said outside the Kampala courthouse where he filed the petition.

Museveni, a 76-year-old former rebel leader who has ruled since 1986, won a sixth term with about 59 percent of the vote.

Wine, whose real name is Robert Kyagulanyi, secured about 35 percent and slammed the vote as a sham.

Under the constitution, Wine had 15 days from the declaration of results by the electoral commission to challenge the outcome.

The Supreme Court must now rule on the petition within 45 days.

Losing candidates have sought unsuccessfully in the past to overturn Museveni's wins in court. One of Africa's longest-serving rulers, Museveni has won every election since 1996, almost all marred by allegations of irregularities.

Sseggona said "soldiers invaded polling stations" and stuffed ballot boxes with pre-ticket votes. Electoral registers were tampered with at other locations, he added.

Museveni, however, declared the election the cleanest in Uganda's post-independence history.

The run-up to the vote was marred by violence and a sustained crackdown on government critics and Museveni's rivals.

In November, at least 54 people were shot dead by security forces loyal to Museveni during protests against one of Wine's numerous arrests.

Access to the headquarters of his political party, the National Unity Platform (NUP), has been blocked for about two weeks.

Security was beefed up across Kampala on Monday, with soldiers atop armored personnel carriers and police marching in the streets.

Uganda's deputy inspector-general of police, Major General Paul Lokech, said the additional security was due to protests threatened by elements aligned to the NUP.

The party denied the allegations, with Secretary-General Lewis David Rubongoya saying it advocates for a "peaceful change of Museveni's government, and not through violence".

Civil society activists have criticized the parameters for challenging Ugandan elections, with judges only examining events on voting day and the declaration of results, without also taking into consideration the overall campaign period.

By law, Wine must prove to the court that any alleged irregularities affected the outcome of the election "to a substantial manner" -- a much higher burden of proof than in civil cases.

Ugandan courts do not "look at elections as a process but only at events on polling day and declaration day, which makes it very difficult to prove the substantial effect of fraud wrongdoing," Kaheru said.