Thousands of Central Africans are seeking refuge in the Democratic Republic of Congo. In Ndu, the far North of the DRC, 30,000 refugees from Bangassou live in precarious conditions after rebel attacks.

"I only fled with my children. I took my children and my little sisters. And I ran away, I got on the canoe and I came here", Chancella Yakemba, a farmer said.

The needs of the refugees have overwhelmed local officials at the UNHCR offering badly needed support.

They offer medical screening among others for children who have been brought here.

"Here, given the huge logistical constraints, it is very difficult to get humanitarian assistance into this area. But we are still aware that the needs of the refugees we have seen are enormous", said Muller Masrabeye, Protection Officer of the United Nations High Commissioner for Refugees (UNHCR) in the D.R. Congo.

Bibi Mbele is president of the local branch of the Federation of Congolese Enterprises.

"Previously, the population in Ndu was less than 1,500 people. But the number of refugees here now is ten times more than the population of Ndu. They are basically dominant here in Ndu", Mbele said.

Bangassou in the CAR was attacked on January 3 by the rebel coalition of patriots for change (CPC). The group was attempting to overthrow President Faustin Archange Touadera who was re-elected in December 2020. Thousands of families crossed the Mbomou river on canoes or swarm to seek refuge in neighboring D.R. Congo. 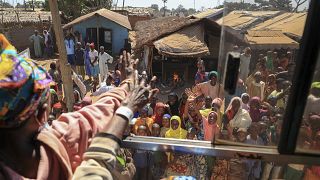