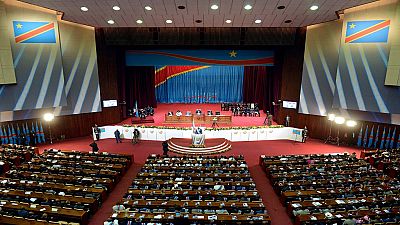 Congolese MPs will on Friday January 22 cast a vote on their membership that will decide the majority in parliament but with particular importance to the political rivalry between the pro-Joseph Kabila camp and current President Felix Tshisekedi.

The plenary which would hold at the People's Palace in Kinshasa, will draw the contours of the new majority in the National Assembly after the divorce between the camp of President Felix Tshisekedi and that of his predecessor, Joseph Kabila.

Twenty-five leaders of political groups and parties have joined the "Sacred alliance of the nation" wanted by the head of state, according to data presented Thursday by Modeste Bahati Lukwebo. There are hundreds of MPs, said Lukwebo. "An overwhelming majority," he concluded.

The Alliance of Democratic Forces of Congo, chaired by Modeste Bahati Lukwebo, is the second political force represented in the Congolese National Assembly with 41 seats, after the PPRD of former president Joseph Kabila (52).

On Friday January 22, Congolese MPs would decide whether or not to join the "sacred union of the nation".

The new majority, if it were to emerge, will be mainly the result of a poaching.

President Tshisekedi having also recruited in the camp of his former ally. Heavyweights among the pro-Kabila have left the ship and that includes former Minister of Communication, Lambert Mende Omalanga.

Opponents have also joined the momentum, including former Vice President Jean Pierre Mbemba and Moïse Katumbi among others. though the sharing of posts could be a bone of contention here.

Tshisekedi now hopes to form a new majority in parliament by winning over members of Kabila’s coalition and other smaller parties.