The beaches across the province of KwaZulu-Natal are typically packed with tents and parasols when throngs of people spend their summers at this popular seaside destination which boasts a particular attraction — swimming with sharks.

"For me, this was such an incredible experience. They're really majestic animals underwater and to just dive with them and see them in their natural habitat is amazing."

In order to safeguard this economically-beneficial touristic hotspot, authorities have put a controversial 'shark net' system in place to protect the income-generating divers from sharks. A move that has sparked outrage among e among environmentalists

Gary Snodgrass, a diving instructor, appears a bit saddened by the situation.

'Jaws' Was Only a Movie

Sharks acquired a bad reputation in the 1950s after a string of deadly attacks saw frightened people abandon the popular white-sand beaches in KwaZulu-Natal.

As such, the provincial tourist industry set out to keep sharks away from skittish beachgoers.

"Oh, we've seen lots of dead sharks that have been caught in the nets. Turtles, dolphins. We have whale sharks caught in these nets."

Today 37 beaches are lined with nets and baited drum lines, spread over 300 kilometres north and south of the provincial capital Durban.

Not a single lethal shark encounter has been reported in protected areas in over 67 years, according to the publicly-funded KwaZulu-Natal (KZN) sharks board and the province now draws over six million visitors each year.

Nevertheless, reports in 2019 of only 100 global shark attacks suggest the predators rarely strike humans. regardless of whether they are separated by nets. 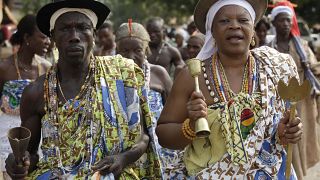