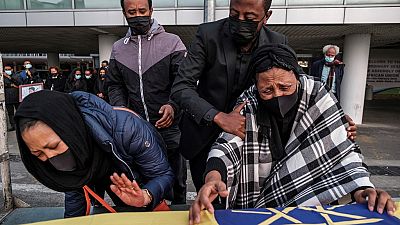 The body of Agitu Gudeta on Tuesday arrived back in Ethiopia from Italy, where she was killed on December 30, 2020 on her farm.

The Ethiopian flag-draped casket carrying her body was received at the Bole International Airport by Addis Ababa city officials and Agitu’s family.

Agitu, 42, was killed in late December on her farm in northern Italy where she raised goats for her cheese business.

A Ghanaian farmworker admitted to killing Agitu with a hammer after raping her.

She had fled Ethiopia in 2010 after participating in anti-government protests.

Her story was reported by numerous international media, as an example of a refugee success story in Italy at a time of rising hostility towards immigrants, fueled by the right-wing League party.

The U.N. refugee agency said it was “pained” by Agitu’s death, and that her entrepreneurial spirit “demonstrated how refugees can contribute to the societies that host them.”