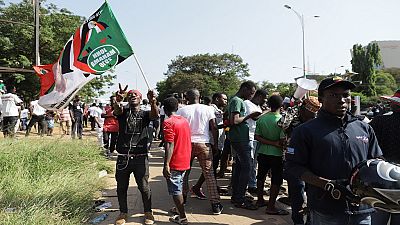 All opposition protests have been banned in Ghana following a spike in post-election demonstrations in the capital Accra. The Ghana Police Service secured a court order restraining all protests earlier this week.

A statement confirming the ban on protests by the National Democratic Congress, NDC, read in part: “_The prohibition order follows an affidavit filed by the police upon receipt of notification from the Greater Accra regional chairman of the NDC, Kobina Ade Coker…”_

The NDC in the notification said it intended daily protests between Sunday 20th December 2020 – 10th January, 2021.

“The request by the NDC cannot obviously be met by the police in view of ongoing post-election and multi-faceted security operations for the festive season and beyond,” the police statement added.

- The reason for the protest -

The NDC is protesting what it says is malfeasance on the part of the Electoral Commission following the conduct of December 7 general elections. President Akufo-Addo, the ruling New Patriotic Party, NPP, candidate was declared winner of the presidential poll.

According to the EC, he beat former president John Dramani Mahama by garnering over 51% of valid votes cast. The NDC disputes the result and Mahama has called for an audit of the polls whiles refusing to concede.

In the parliamentary vote, both parties according to official results got 137 seats in the 275 seater legislature. A former NPP MP won the only other seat as an independent candidate. As things stand, he will decide which party gets majority in the lawmaking chamber.

The protest ban has largely been criticised as setting Ghana back on the respect for and protection of individual freedoms. Others have, however, stressed that the ban was a necessary measure to maintain security.

Meanwhile, a group of opposition MPs who marched to present a petition to the EC this week were blocked and heckled by the police. The state subsequently brought charges against a number of them.

Preparations for the January 7 swearing in of president Akufo-Addo and the new parliament is still underway. The NDC has also hinted that it will file an election petition to challenge the EC declaration. A number of petitions are expected in the case of some parliamentary results.