People in Niger began casting their ballots in the country's presidential and parliamentary elections on Sunday.

At the polling station of Dar-es-Salam, a popular district in the capital Niamey, the first voters began to vote around 09:00 (08:00 GMT) about an hour later than scheduled.

Voting is scheduled to close at 7:00 pm local time, but election workers have instructions to extend voting hours in case of delay.

"I expect the Nigerien president to put security, health, progress, and democracy first," Aboubakar Saleh, a 37-year-old launderer, told AFP without wanting to reveal his vote.

Issaka Soumana, a 52-year-old truck driver, wants "that it changes. Niger is not going. Our country must emerge," he says, brandishing his ink-stained thumb, showing that he has put his ballot in the ballot box.

Some 7.4 million people are eligible to vote.

Thirty candidates are in the running for the ballot, which is arousing "little enthusiasm" from the population, according to a connoisseur of Nigerien politics.

This source highlights the lack of renewal of the political class, with two former presidents (Mahamane Ousmane and Salou Djibo) and two former prime ministers (Seini Oumarou and Albadé Abouba) among the candidates, for an average age of over 60 years, in a country where the population is very young.

Mohamed Bazoum, the right-hand man of outgoing President Mahamadou Issoufou is the favorite to win.

Aged 60, this former Minister of the Interior is aiming for a victory in the first round, which has never been achieved before.

Bazoum, who benefits from the electoral machinery of his party and the state, has promised to focus on security and education, especially for young girls while the country holds the world fertility record (7.6 children per woman).

On the security front, two deadly attacks occurred in the run-up to the elections, one in the west (7 soldiers killed on December 21) where the Islamic State in the Great Sahara (EIGS) regularly rages, and one in the east claimed by Boko Haram (34 dead on December 12).

President Mahamadou Issofou is preparing to hand over power after the expiry of his ten-year tenure.

The country's 23 million People have high hopes for change. Niger is the world's poorest according to the UN's Human Development Index and also one of those hardest hit by climate change. 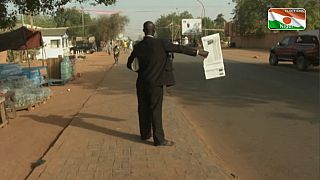