Up in arms over the Egyptian President's state visit to France, around 20 protesters gathered outside the Paris National Assembly late on Monday, shouting "down with dictatorship".

The demonstration outside the parliament painted a very different picture to earlier in the day when France welcomed President Abdel Fattah al-Sisi with a cavalry parade through Paris.

Before the three-day visit, rights groups accused France of indulging President al-Sisi's "brutal repression of any form of dissent".

"We've come across a President of the Republic who welcomes the butcher of Cairo, the butcher of Egypt, in great pomp, on a state visit, with the Republican Guard," said François de Roche, chief of the NGO Justice and Rights Without Borders.

"We have fallen on our heads. This is unacceptable. France, the country of Human Rights, cannot accept this."

But French President Emmanuel Macron refrained from direct criticism of former army general Sisi, who has cracked down on supporters of ousted Islamist president Mohammed Morsi, as well as on leftists and liberals.

Macron told a joint press conference with Sisi that he would not condition the sale of weapons to Egypt and trade ties on human rights as he did not want to weaken Cairo’s ability to counter-terrorism in the region.

"I think it is more effective to have a policy of dialogue than a policy of boycott which would reduce the effectiveness of one of our partners in the fight against terrorism and for regional stability," he said.

To force the issue of human rights would be both "ineffective on the subject of human rights and counter-productive in the fight against terrorism, that's why I won't do it," he added 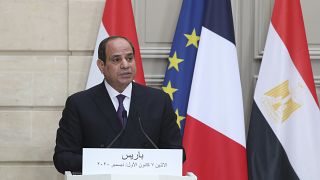