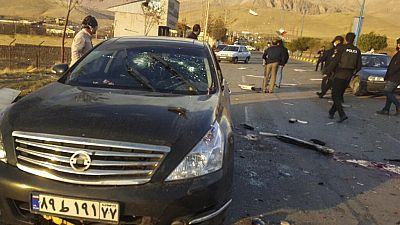 An Iranian scientist named by the West as the leader of the Islamic Republic's disbanded military nuclear program was killed Friday in an ambush on the outskirts of Tehran, authorities said.

Iran's foreign minister alleged the killing of Mohsen Fakhrizadeh bore ``serious indications'' of an Israeli role, but did not elaborate.

Israel, long suspected of killing several Iranian nuclear scientists a decade ago, declined to immediately comment. Israeli Prime Minister Benjamin Netanyahu once told the public to "``remember that name'' when talking about Fakhrizadeh.

The killing risks further raising tensions across the Mideast, nearly a year after Iran and the U.S. stood on the brink of war when an American drone strike killed Qassem Soleimani, a top Iranian general in Baghdad.

Details about the assassination remained slim in the hours after the attack, which happened in Absard, a village just east of the capital that is a retreat for the Iranian elite.

Iranian state television said an old truck with explosives hidden under a load of wood blew up near a sedan carrying Fakhrizadeh.

Photos and video shared online showed a Nissan sedan with bullet holes in the windshield and blood pooled on the road.

While no one claimed responsibility for the attack, Iranian Foreign Minister Mohammad Javad Zarif pointed the finger at Israel, calling the killing an act of ``"state terror.''