Save and Restore South African Rivers

South African NGO Fountain Rivers Earth Sanctuary Hennops, simply known as (FRESH) is on a water cleanup mission as its volunteers embark on a pilot project to remove plastic waste from litter traps placed two weeks ago on the Hennnops River in the Clayville township in Tembisa, north-east of Johannesburg.

The accumulation of waste i.e. three huge plastic and styrofoam islands lower down in the river  — one over 100 meters long and so tightly packed that one can walk over it, and an average of 150 rubbish bags full of plastics has been collected over just 50 metres, has been both mindboggling and encouraging.

Willem Snyman, the Director of Fountain Rivers Earth Sanctuary Hennops (FRESH), outlines what has already been carried out, "We started putting the nets up at the beginning of the rainy season to try and stop this huge avalanche. It seems like in the winter a lot of stuff gets in informal dumps in the townships and stuff, so all of that stuff gets washed down in the rainy season. So, it keeps on the whole summer but I think the worst stuff is in the beginning. So, we are trying to stop it here."

The project also helps to create livelihoods from waste collection — employing people from the community to assist with river clean-ups.

SSibusiso Dlomo, a volunteer and an unemployed Clayville resident, shares his passion for the opportunity, "So I think this project is quite an opportunity for the guys in the community because some of us now we can... it already created employment for us and then at the same time this place, these plastics make this environment very dirty in such a way that it's a very dangerous environment to people." 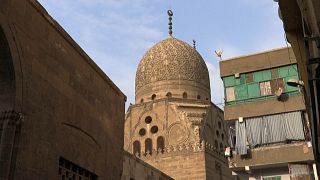 Cairo's "City of the Dead" Comes Back to Life

Cairo's "City of the Dead" Comes Back to Life