The Kenyan parliament is debating a reform of the constitution.

Two years after the historic handshake between President Uhuru Kenyatta and opposition leader Raila Amollo Odinga, the two politicians have both spoken in favour of a report that could put an end to electoral violence.

Members of parliament will have to vote on an amendment to the 2010 Constitution, which would change the presidential system into a hybrid structure that would reintroduce an official role for the leader of the opposition.

"Documents that has been worked on and again, I repeat, for a period now of two years and a document whose objective is really nothing more than to find what ails our country and hopefully give us a solution that will heal our country," Kenyatta said.

Raila Amollo Odinga, the leader of the Opposition, added:

"When we had finished here, we had a three tier structure of government. The local, region, and the national. A diversion, the region was scrapped. We ended up now with the counties that are two tier, the national and the county, Your Excellency. So this is an issue that can be revisited

Known as the Building Bridges Initiative, this law is a consequence of the violence that occurred after the election in 2017 and caused 90 deaths. 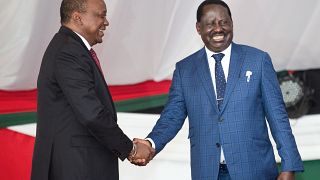