In main constituencies, Condé won a majority of votes according to the electoral authority but Opposition supporters are deeply suspicious about the fairness of the poll.

"Now it is for all of us to fight to preserve, to defend, our victory and you know that it is threatened by Alpha Condé who had no voters but an army of fraudsters," he said.

Diallo who has been barricaded inside his house by Security forces said it’s for safety reasons and called on his supporters to continue the protests.

"My dear compatriots, I am counting on you to continue the fight until victory is achieved...," Diallo further stressed.

Diallo's self-proclaimed election victory stirred up tensions, and his supporters descended into violent clashes with security forces on Monday.

Clashes continued in Conakry on Wednesday, a security officer, told the press that at least three people had died. 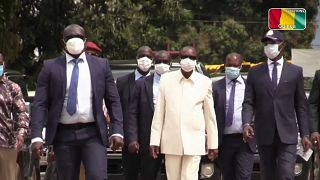