The former head of athletics' governing body Lamine Diack, has been sentenced to prison after being found guilty of corruption.

The Senegalese 87-year-old faced money laundering and corruption charges for his role in a scheme that allowed Russian athletes to pay bribes to compete when they should have been suspended for doping.

He was handed a two-year prison sentence at a Paris court on Wednesday. He was also sentenced to an additional two year suspended jail time.

His lawyers said they will appeal, keeping Diack out of jail for now. Diack did not comment as he walked out of court.

It's a spectacular fall from grace.

From 1999- 2015 he was the head of the International Association of Athletics' Federations (IAAF), now called World Athletics.

Diack was found guilty of multiple corruption charges and of breach of trust but acquitted of a money laundering charge.

One of Diack’s lawyers, Simon Ndiaye, called the verdict “unjust and inhuman” and said the court made his client a “scapegoat.”

His lawyers said they will appeal, keeping Diack out of jail for now. Diack did not comment as he walked out of court.

The court also handed guilty verdicts to five other people, including Diack’s son, Papa Massata Diack, who worked as an IAAF marketing consultant.

The court sentenced him in his absence to five years in prison and a fine of 1 million euros ($1.17 million).

The judge said $15 million was funneled to the younger Diack’s companies, including commissions and money creamed off contracts and the sale of TV rights and other transactions while his father was in charge at the IAAF.

Papa Massata Diack, fled to Senegal after the investigation was opened in France.

He was tried in absentia and Senegal has refused to extradite him.

Ahead of the verdict, Papa Massata Diack this week called the charges “the biggest lie in the history of world sport.”

"What we can take from the verdict is that it is a big disappointment for most Senegalese. Today everyone is asking the question of why the double standard compared to the Sepp Blatter and Michel Platini cases, at the level of FIFA, who have not yet been investigated by European justice system." 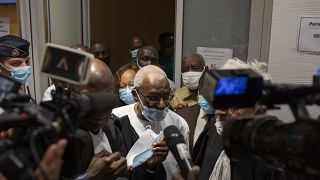