Hamed, an Ivorian elephant, although part of the country’s national wildlife pride, has been a bit of a nuisance the last few years to his human neighbours residing within proximity to his old home at the Azagny National Park in Guitry, the Southern region — where he eventually started to destroy farmers’ land and frighten people.

“At the beginning, like any elephant, we thought that he was the emblem of Ivory Coast and should be honoured,” said resident Eric Serge. “But after a while, he eventually started to get very aggressive, and the whole community began to worry about his presence.”

Hence, he awaits his relocation on Thursday to his new home at a zoo in Abidjan where authorities hope he will be safe and have less troublesome human encounters.

Colonel Jerome Ake, the country's Deputy Director-General of Forests and Wildlife, said the elephant will go “where there will be no more nuisance."

vorian authorities are on a mission to catch and relocate wild elephants that have disrupted farming communities in a bid to save their dwindling population within the nation.

Côte d’Ivoire was once home to more than 1,100 elephants in diverse habitats. Today however, experts estimate that around only 300 remain - dwelling in small groups or in isolation and vulnerable to poachers who seek their ivory tusks for trafficking and foreign markets.

The West African nation is considering adopting a new law to preserve its national elephant populations. 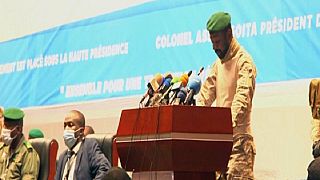 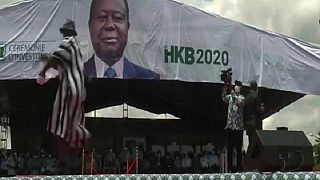