Outrageous traffic jams during rush hour, are nothing new in Lagos — an economic epicentre, home to 20 million inhabitants and fashion capital in the West African giant known as Nigeria.

Commuting has become an even worse nightmare, as, after a period of somewhat lighter traffic in light of the COVID-19 containment restrictions, the government announced — out of the blue, the partial closing of the city’s main bridge, Third Mainland, for a construction project to prevent its supposed impending total collapse.

The Third Mainland Bridge is Africa's second-largest bridge, extending nearly 12 kilometres (7.5 miles) to link Lagos Island, the business heart of the city, with the mainland where most people live. When it was built in 1990, Nigeria's economic engine had just six million residents. Today, its population has more than tripled and the bridge is saturated, with tens of thousands of vehicles crossing each day.

Rumours about its safety and lack of maintenance have long been part of Lagos folklore, although the authorities steadfastly denied there was any risk. "If there had been another solution, we would have taken it," assured Works and Housing Minister Babatunde Fashola — who was also previously the governor of Lagos State, as he urged city residents to cooperate and take alternative routes.

However, many say the bridge is all they have. The other two bridges to Lagos Island cannot absorb the extra traffic, especially as one is also partially closed for repairs. The huge dependence on a 30-year-old structure crystallises Lagos's chronic traffic problems. A string of grand schemes to improve public transport have been unveiled in recent years, only to gather dust on urban planners' shelves. A case in point is the light rail project that was supposed to relieve pressure on the bridges. After years of delays, work on the project appears to have halted completely. Ferries are an obvious option, but a lack of infrastructure and safety worries complicate their development.

For Lagos residents forced to endure hours of traffic jams, the work on the Third Mainland Bridge is proving to be a trying affair.

Cyril Oyenuga is clearly exhausted as he lifts a small towel wedged into the window to protect him from the sun. "Yesterday I spent five hours in traffic jams. It's very tiring," he said. "But I don't have a choice. I have to work."

Lawson Kayode, an intern working on Lagos Island and living on the Mainland, expresses his frustration, "They are charging us because of the inconvenience of the closure of the bridge and because of the traffic. Because the fuel, the drivers' fuel, they will be in traffic for a while... longer than the usual time that they are supposed to be in traffic or they are supposed to ply their route."

It now takes Lawson more than two hours to get to work when it would normally take him 40 minutes in a shared taxi. His commute is not only much longer but much more expensive. "The prices have already gone up due to social distancing rules limiting the number of passengers on the bus," the intern told AFP.

The bridge will close for 6 months as residents struggle with 5-hour traffic amidst police enforcing a 10 pm COVID-19 brought-on curfew to slow the spread of the coronavirus. People could find themselves blocked on the streets for the night or might have to risk navigating potentially policemen patrolling the checkpoints.

The economic life of the Nigerian megacity may come to a standstill due to the closure of one of this main bridge in the former capital. Economist Bismarck Rewane estimates the bridge's partial closure will cost more than $1 billion per month in lost productivity. Nigeria's economy has already been directly affected by the costs of handling the coronavirus pandemic and also indirectly impacted in the form of a plunge in global oil prices — which is a major source of the nation's GDP. The IMF expects Nigeria's economy to contract by at least 3.4% this year.

On the other hand, Rewane noted, the weight would have been harder to bear if the construction work had been put off. He intuited, "It is better to have carried out work now when many companies are remote working, schools and churches are closed and when the economy is going slowly than in six months when the cost would have been extremely prohibitive.” 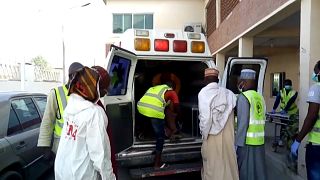