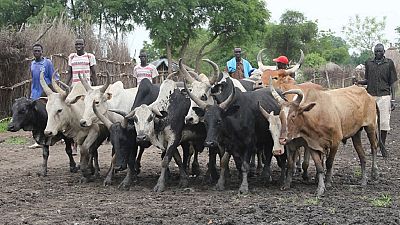 <p>How to shelter livestock is an issue that has been at the heart of discussions in Uganda. After more than 10 years of relative calm, poachers have returned to service in the Karamoja subregion, in northeastern Uganda.</p> <p>The poachers took advantage of the conflict in South Sudan and the anarchy in north-west Kenya to stock up on weapons. Now they are proving a headache for defenseless shepherds.</p> <p>Lowiny Kalisto is an affected herder: “They attack our cows because we don’t have weapons to protect them. Most of the kraals here have been attacked, I have lost friends and cows.”</p> <p>These cows have been at the heart of conflicts in the region for years. More than 200 people were killed in the raids, including 68 in June alone. The Ugandan army has said it will step up operations to hunt and disarm these attackers.</p> <p>Major Peter Mugisa, regional spokesperson for the army confirmed their operations: “We deployed a mobile force to intercept all of these raids. Most cases occur when our mobile force comes into contact with these aggravated thieves.”</p> <style>.embed-container { position: relative; padding-bottom: 56.25%; height: 0; overflow: hidden; max-width: 100%; } .embed-container iframe, .embed-container object, .embed-container embed { position: absolute; top: 0; left: 0; width: 100%; height: 100%; }</style><div class='embed-container'><iframe src='https://www.youtube.com/embed/36VatzL8isw' frameborder='0' allowfullscreen></iframe></div> <p>The shepherds are now living in fear and have had to move their animals near army posts to protect themselves. According to Africanews journalist Ronald Kato who visited the area, raids are so frequent that most herds are practically short of cows. </p> <p>Herders now only keep small animals – goats and sheep. A raid unleashes an attack of revenge, then an endless cycle of violence hits an area that is already the least developed in Uganda.</p> <p>Human rights defenders, for their part, denounce the carelessness of the public authorities on the issue. Simon Peter Longoli, a member of the Karamoja Development Forum, shared his views.</p> <p>“It is important to consider a shorter and more effective disarmament period, during which a full level of resources will be devoted to this process, in order to quickly put an end to this arms problem.”</p> <p>Experts warn that the phenomenon could have serious consequences for the region and hamper plans to end decades of development in Karamoja.</p> <style>.embed-container { position: relative; padding-bottom: 56.25%; height: 0; overflow: hidden; max-width: 100%; } .embed-container iframe, .embed-container object, .embed-container embed { position: absolute; top: 0; left: 0; width: 100%; height: 100%; }</style><div class='embed-container'><iframe src='https://www.youtube.com/embed/0Pk_il9ioMQ' frameborder='0' allowfullscreen></iframe></div>