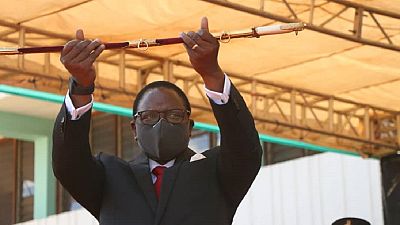 <p>Scaled-down inauguration: Malawi president vows to declare assets</p> <p>Malawi’s new president Lazarus Chakwera’s official inauguration took place today (July 6) days after he was sworn into office after defeating then incumbent Peter Mutharika in a keenly contested poll rerun.</p> <p>The event was largely scaled down due to rising cases of the <span class="caps">COVID</span>-19 pandemic. It took place at the Kamuzu Barracks in Lilongwe. In attendance were high level members of government. </p> <p>The guest list according to reports was restricted to just 100 delegates after the president cancelled major celebrations which were expected to be held at the Bingu National Stadium.</p> <p>The most notable foreign dignitary being Samia Suluhu, Tanzania vice-president. Most diplomats serving in the country were in attendance with a more visible show of virus prevention measures as compared to a week ago during the packed swearing in.</p> <p>The president officially received the sword of office which confers on him the power as Commander – in – chief of the Armed Forces. </p> <p><blockquote class="twitter-tweet"><p lang="en" dir="ltr"><a href="https://twitter.com/hashtag/ChakweraInauguration?src=hash&ref_src=twsrc%5Etfw">#ChakweraInauguration</a> in pictures<a href="https://twitter.com/hashtag/NationOnline?src=hash&ref_src=twsrc%5Etfw">#NationOnline</a> <a href="https://t.co/tJuYNYz1Gw">pic.twitter.com/tJuYNYz1Gw</a></p>— NationOnline (@NationOnlineMw) <a href="https://twitter.com/NationOnlineMw/status/1280090276296564736?ref_src=twsrc%5Etfw">July 6, 2020</a></blockquote> <script async src="https://platform.twitter.com/widgets.js" charset="utf-8"></script></p> <p>Local Nation newspaper reports that the president has pledged to declare his assets, reduce his powers, answer questions in parliament, consult the Leader of Opposition every three months and operationalise the Access to Information Bill.</p> <p>Chakwera also praised major stakeholders in the election petition and subsequent re-election. He singled out among others the court witnesses, judiciary, civil society, journalists, members of parliament, campaign funders, Electoral Commission and members of the security forces.</p> <p>“There cannot be a new Malawi if the only people deemed guilty of breaking the country are the ones who lost the election. There must be a collective responsibility in fixing the country’s problems,” he said.</p>