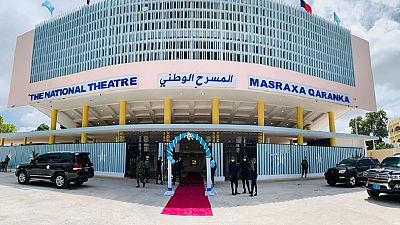 Somalis can now boast a functional national theater after the facility located in the capital Mogadishu was formally reopened having been closed for refurbishment.

According to reports, the refurbishment was funded by some businesses, the chamber of commerce and contributions by civilian workers.

The reopening was made to coincide with the 60th independence day celebration with the president Mohamed Abdullahi Farmaajo and other top government officials in attendance.

The president officially cut the ribbon for the reopening before joining a sizeable audience to enjoy performances. The state-affiliated news agency reported that the president also cut the ribbons for recently renovated Ministry of Information, Culture and Tourism and the Police Command Headquarters buildings.

For many Somalis, they are happy that the facility has been restored to functionality. It is seen as a place where the country’s rich culture and traditions will and can be showcased.

It has had a history of closure with the most notable being back in the early 1990s when the country descended into civil war and Mogadishu became a no-go area according to a BBC report.

The 2012 report was at the time reporting about the reopening after 20 years. “The event was marked with the showing of a local play, traditional music and comedy performances for an audience of around 1,000 people,” the report added.

Mogadishu’s national theatre reopens today after being refurbished with funds from businesses, the chamber of commerce and civilian government workers. (Photos by RadioMogadishu) pic.twitter.com/FNhtVOcAv7

Beyond that reopening, the facility was yet again abandoned due to insecurity with a 2017 documentary chronicling the decrepit state into which the structure had been left. Government after government have committed to ensuring security and rebuilding the country which still suffers varying degrees of attack from insurgent group, Al-Shabaab.

Another national facility that has been restored in recent years is the National Stadium, also in Mogadishu. Somalia has honoured international games in Djibouti because of insecurity in the capital. The stadium was captured from Al Shabaab by AMISOM and the Somali Army during an operation to liberate the city in September 2011.

It was handed back to government in 2018, following which rebuilding started in earnest. The renovation which started early this year is said to have been completed but official reopening is hampered by COVID-19 pandemic.