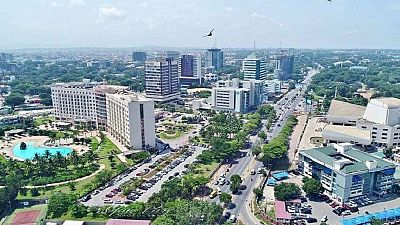 <p><strong>A moderate earth tremor was felt in most parts of Ghana’s capital Accra late on Wednesday evening.</strong> </p> <p>According to the United States Geological Survey the seismic movement reached magnitude 4.0 which makes it one of the strongest earthquake in Ghana in years.</p> <p>The epicenter was located in the western part of the city. The phenomenon which took place at about 10:40 pm local time on June 24, 2020, occurred three times in the space of 10 minutes.</p> <p>Already, the Ghana Geological Survey Authority (<span class="caps">GGSA</span>) has warned that the series of tremor occurrences in parts of the Greater Accra Region over the years is signal of a looming earthquake of greater magnitude in the future.</p> <p>On March 24, 2018, a similar earth tremor that measured 4.0 on the Richter scale was recorded in Accra.</p> <p>On December 9, 2018, another one was experienced in Accra.</p> <p>Ghana is said to have a major earthquake fault line stretching from the McCarthy Hill area in Accra westwards towards the Central Region and eastwards towards the Akuapim Ridge all the way to the Volta Region in the east.</p> <p>The epicentre of the fault line is thought to be located around the McCarthy-Weija Dam catchment area in Accra.</p> <p>Since 1615 and 1939 when Ghana experienced its severest earthquake with a magnitude of over 6.0 on the Richter scale, there have been reported yearly occurrences of fleeting earth tremors.</p> <p>According to the <span class="caps">GGSA</span>, signs picked up after earth tremors hit parts of Accra on March 24, 2018, showed that the fault lines were active, which meant that an earthquake could occur at any time.</p> <p>On January 12, 2006, a tremor measuring 3.7 on the Richter scale hit parts of the capital, according to the Geological Survey Department.</p> <p>There was a similar tremor measuring 3.8 on the Richter scale in May 2003.</p> <p><strong><em>Agencies</em></strong></p>