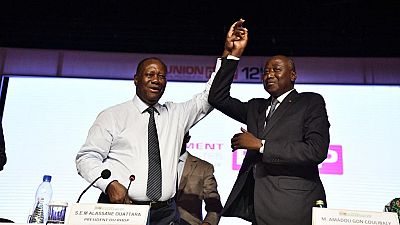 Outgoing Ivorian president Alassane Ouattara has named a successor as his tenure winds down with polls expected in October 2020.

The president has named current Prime Minister Amadou Gon Coulibaly as the ruling party’s candidate to take over as he exits. Coulibaly is a close ally of Ouattara and has held the Prime Minister portfolio since 2017.

Ouattara had announced last week that he would not seek re-election, a move that put to rest speculation that he wanted to use constitutional reforms to force an extension.

With his announcement, focus turned to his possible successor, at a gathering in the capital Abidjan, party faithful voted to endorse Coulibaly’s candidature in the polls.

The main opposition blocs in the West African country have yet to also name their candidates for the polls. Former Speaker of Parliament Guillame Soro who has declared his intention to run is currently in forced exile after government blocked his return home after an European tour.

Speculation of Ouattara’s wish to continue in power was tied to the possible participation of two former presidents – Laurent Gbagbo and Henri Konan Bédié- in the vote. The two have not yet commented on their positions. Bedie is in the country but Gbagbo is in Brussels as legal processes at the International Criminal Court continues.

Yesterday, Thursday, March 12, 2020, the RHDP Political Council unanimously nominated me as the party’s candidate for the October 2020 presidential election.

I measure the magnitude of the responsibility and the magnitude of the burden. I’ve been learning with President Alassane Ouattara for 30 years. I have had the opportunity to serve the country as Minister of State, Secretary General of the Presidency and Prime Minister.

At these positions of responsibility, I was able to see what is involved in managing the state and to measure its complexity. I was able, alongside President Alassane Ouattara, to also realize the constraints that this imposes on those who want to embody the Republic.

I pledge that the will of the President of the Republic to have a unity and a united team will be fulfilled. I will do everything in my power to make it so that we are united. I appeal to all my sisters and brothers to join us. We must win these elections in the first round!