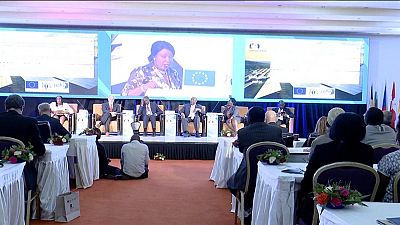 The European Union in Uganda together with all the EU members states and the Private Sector Foundation Uganda- (PSFU) recently held the first ever Uganda-Europe Business Forum.

The event which took place at Speke Resort Munyonyo from March 9-10 2020, attracted investment from the European private sector with President Yoweri Museveni as the the guest of Honour.

In an opening remark by the Ambassador of the European Union to Uganda, Attilio Pacifici he noted that the unfolding spread worldwide of the coronavirus made it impossible for the European Commissioner or any of her representatives to be be present at the event.

The Government of Uganda in partnership with development partners including the European Union and its Member States has made significant strides.

“Over the last year, the EU Delegation to Uganda partnered with Private Sector Foundation Uganda to work together with the private sector, from both Uganda and Europe, in order to assess the main constraints hampering new, sustainable investments in this country and propose measures and remedies that can improve the investment and business climate,” Pacifici added.

“The Government of Uganda in partnership with development partners including the European Union and its Member States has made significant strides in laying a firm foundation for investments, industrialization and international trade. By participating in this Forum, therefore, you are availing yourselves an opportunity to network and share ideas with each other with a view to harness the opportunities created by the firm foundation,” said Museveni.

Africanews Correspondent in Kampala, Uganda, Darren Allan Kyeyune said the Business Summit, the first of a kind, in the East African Nation can be linked to President Yoweri Museveni commitment.

He added that a few years ago, President Museveni met with a delegation from the European Union and told them that he was tired of Uganda receiving donations and grants.

IN PICTURES: The 1st ever Uganda-Europe Business Forum ???? a highly interactive business gathering, presenting opportunities to build networks and create trade and investment opportunities for the private sector in ????. #UgandaEUBF2020 #EUandUganda pic.twitter.com/HqgM7HRD5q

According to organizers of the two day event, the forum was to facilitate collaboration between Uganda and European Business environment.