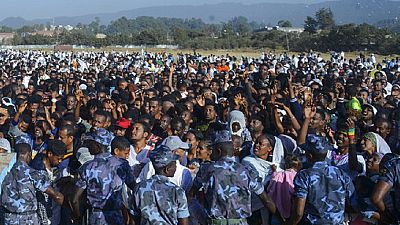 Police in the Ethiopian capital Addis Ababa clashed with Orthodox Christians over a disputed piece of land leading to three deaths and several others injured, local portals reported.

Police had moved in to destroy a structure on the said piece of land but they were resisted with force by faithful who were present.

Police eventually fired live rounds and tear gas at the people leading to the death and injuries. Funerals have since been held for the victims with the others receiving medical treatment for mostly gunshot wounds.

The clash happened on the dawn of Tuesday, January 4, in an area known as 22 Mazoria. The city mayor in reacting to the incident slammed the police action which he said was on the blind side of the city administration.

The mayor, during his press briefing on Wednesday said seven people had been detained over the issue. he said a number of government officers were among the detainees – he declined to give names.

Patriarch of the Ethiopian Orthodox Church Abune Matias demanded the immediate arrest and prosecution of perpetrators. The Church disclosed that the police violence had demolished the church which housed arcs of Saint Gabriel and Saint Arsema.

The Addis Ababa Synod leadership insists that the church had for over a decade fenced the land in question and had long been waiting for ownership title deed from the city administration.