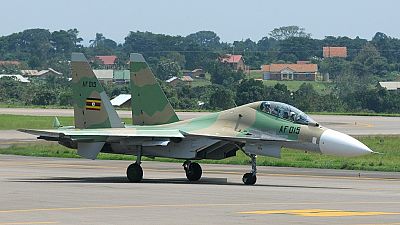 <p>Two crew members aboard a Ugandan air force jet were killed when their jet crashed, the army confirmed on Tuesday.</p> <p>According to the spokesman of the Ugandan Peoples’ Defense Forces, <span class="caps">UPDF</span>, Richard Maremire; the <span class="caps">UPDAF</span> Jet Ranger was on a training mission when the incident occured.</p> <p>He stressed that an investigation was underway into the possible causes. “Condolences to their families and the entire <span class="caps">UPDF</span> fraternity,” he said in a tweet.</p> <blockquote class="twitter-tweet"><p lang="en" dir="ltr">We regret to inform that a <span class="caps">UPDAF</span> Jet Ranger on a training mission has <a href="https://t.co/tGvFpSpS24">https://t.co/tGvFpSpS24</a> had two crew members. Sadly, no one has survived.Investigation into the cause has started.Condolences to their families and the enire <span class="caps">UPDF</span> fraternity.</p>— Brig RichardKaremire (@UPDFspokespersn) <a href="https://twitter.com/UPDFspokespersn/status/1222116220025090048?ref_src=twsrc%5Etfw">January 28, 2020</a></blockquote> <script async src="https://platform.twitter.com/widgets.js" charset="utf-8"></script> <p><span class="caps">UPDAF</span> is Ugandan Peoples’ Defence Air Force, the air wing and service arm of the army. The other wing being the Land Forces. It was established by the Defence forces Act, 2005, Section 3 Sub section 2(b).</p> <p>The Uganda Air Force traces its origins from the Armed Forces Act, which was passed by parliament in January 1964. The gist of the Act underscored the necessity of defending Uganda’s airspace, a need paramount for modern warfare, since World War 1. </p> <p>At this point in time, the cold war eventualities had necessitated post colonial states to establish strong armies that would defend the territorial integrity of African countries.</p>