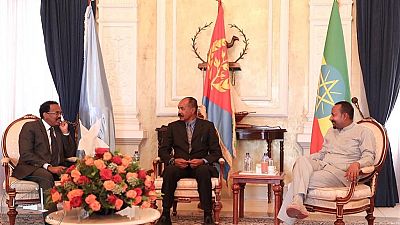 The Eritrean capital Asmara is hosting the third round of a trilateral summit between presidents of Eritrea and Somalia and the Ethiopian Prime Minister.

PM Abiy Ahmed was the first of the visiting leaders to arrive in Asmara on Sunday. He was received at the airport by Eritrean president Isaias Afwerki following which they held bilateral talks.

Abiy was accompanied on the trip by Defense Minister Lemma Megerssa and other officials. Eritrean Information Minister shared photos of the two delegations walking the streets of Asmara on Sunday evening.

The Somali president Mohamed Abdullahi Farmaajo landed in Asmara on Monday and was also received by Afwerki.

The current summit is the third such between the three leaders. The first took place in Asmara whiles the follow up was in Ethiopia’s Bahir Dar in September and November 2018 respectively.