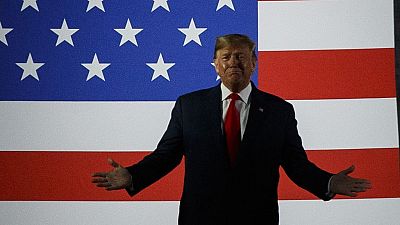 Ethiopia’s prime minister Abiy Ahmed has advised US president Donald Trump to direct his complaints about not winning the Nobel Peace Prize to the awards committee in Oslo.

Abiy in December 2019 received the 2019 Nobel Peace Prize for his role in the 2018 Ethiopia – Eritrea peace deal and reforms back home.

At a rally in Ohio on January 9, 2020, Trump said the leader of one of the country’s had been awarded a Nobel Peace Prize after he (Trump) had made a deal and saved a country.

I said... what the... did I have something to do with it? Yeah. But you know that’s the way it is. As long as we know that’s all that matters. I saved a big war, I saved a couple of them.

Abiy’s acceptance of a border ruling and offer of peace to Eritrea was received by Eritrea’s Isaias Afwerki with both countries closing the chapter on two-decades of a standoff.

Many analysts in the region had mentioned the involvement of foreign nations in bringing about reconciliation. The Gulf states – especially Saudi Arabia and the United Arab Emirates – were routinely mentioned as key backers of the deal. Both countries have awarded Gold Medals to Abiy and Afwerki after the deal.

In response to Trump’s claims of deserving the Peace Prize, Abiy told journalists in South Africa

‘‘To be honest, I am not aware of the criteria used to select winners of the prize, so Trump’s complaint must go to the Nobel Prize Committee in Oslo, not Ethiopia,’‘ Abiy said at a joint press briefing with South Africa’s president Cyril Ramaphosa.

‘‘I am not working for the prize, I am working for peace which is a very critical thing for our region.’‘

VIDEO: After US President Donald Trump said that he believes he deserves the 2019 Nobel Peace Prize, Abiy Ahmed, the winner and Ethiopian Prime Minister replied: “If Donald Trump wants to complain, he should go to Oslo, not Ethiopia” pic.twitter.com/63IrjUKK9D

Trump’s disclosure that he played a hand in the latest Nobel Peace Prize by ‘saving a country’ went viral last week.

“I said… what the… did I have something to do with it? Yeah. But you know that’s the way it is. As long as we know that’s all that matters. I saved a big war, I saved a couple of them,” he added as supporters cheered him.

“I made a deal, I saved a country, and I just heard that the head of that country is now getting the Nobel Peace Prize for saving the country. I said, 'what, did I have something do with it?'” — Trump whines about not having a Nobel Peace Prize pic.twitter.com/PjVsZCkThY

Which deal was Trump referring to?

Many Ethiopians were puzzled by Trump’s remarks. Some said his talk of a deal must have referred to the new peace with Eritrea.

But one senior Ethiopian official told The Associated Press the remarks referred to preventing further tensions between Ethiopia and Egypt over a massive dam that Ethiopia is completing on the Nile river. Egypt says the dam threatens its water supply. Ethiopia says it’s needed for development.

Ministers from the countries, plus Sudan, are expected to meet in Washington on Monday to report on the failure of their latest round of talks.

“He was talking about Egypt and Ethiopia,” the official with Ethiopia’s foreign ministry said. He spoke on condition of anonymity because he was not authorized to speak to the media on the matter.

The official asserted that Egypt’s president lobbied Trump over the disputed dam project, leading to the U.S. taking a role in the discussions.

“President Trump really believes he avoided a war as such … but that was not the case,” the official said.