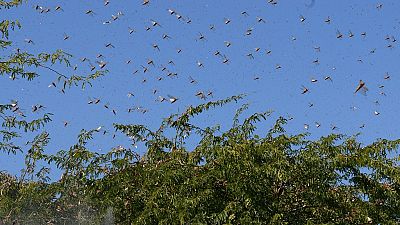 <p>Several East African nations including Ethiopia, Somalia and Kenya are struggling to cope with a swarm invasion that has lasted over a month, causing panic in the agriculture, aviation and public sectors.</p> <p>The locusts, part of the grasshopper family, have led to what the Food and Agriculture Organization (<span class="caps">FAO</span>) has termed the “worst situation in 25 years” in the Horn of Africa as the region is suffering its worst invasion for decades. </p> <p><span class="caps">FAO</span> says these grasshopper swarms can be up to one kilometre wide, contain up to 80 million hungry little pests, and travel up to 130 kilometres per day.</p> <p>Having formed in eastern Ethiopia and northern Somalia, they have moved through the region, possibly still threatening South Sudan and Uganda.</p> <p>In tis article, we highlight the threat posed by the locusts in different nations and how authorities have coped.</p> <h2 style="font-size:16px;">Ethiopian Airlines hit by swarm</h2> <p>Last week, an Ethiopian Airlines flight was forced to make an emergency landing by a swarm of grasshoppers on its way to the Ethiopian city of Dire Dawa.</p> <p>The incident reported by AeroNews happened on Thursday 9 January 2020 affecting a Boeing 737-700 operating flight ET363 from Djibouti to Dire Dawa. </p> <p>According to the report, when ET363 hit the swarm, the grasshoppers were ingested into the engines and significantly reduced visibility from the cockpit windows. The crew then made two attempts to land in Dire Dawa before the decision was made to divert to Addis Ababa where the plane landed safely some thirty minutes later. </p> <blockquote class="twitter-tweet"><p lang="ar" dir="rtl">طائرة <a href="https://twitter.com/hashtag/%D8%A7%D9%84%D8%AE%D8%B7%D9%88%D8%B7_%D8%A7%D9%84%D8%A3%D8%AB%D9%8A%D9%88%D8%A8%D9%8A%D8%A9?src=hash&ref_src=twsrc%5Etfw">#الخطوط_الأثيوبية</a> ، رحلة ET363# ، من نوع B737-700 تصطدم بأسراب الجراد أثناء الهبوط التدريجي لمطار ديرداوا قادمة من جيبوتي. <br /> قائد الطائرة قرر المواصلة والهبوط بسلام <a href="https://twitter.com/hashtag/%D8%A7%D8%AE%D8%A8%D8%A7%D8%B1_%D8%A7%D9%84%D8%B7%D9%8A%D8%B1%D8%A7%D9%86?src=hash&ref_src=twsrc%5Etfw">#اخبار_الطيران</a> ✈️ <a href="https://t.co/YsyvlIAWmj">pic.twitter.com/YsyvlIAWmj</a></p>— عشاق عالم الطيران (@AviationWG) <a href="https://twitter.com/AviationWG/status/1216442493455208449?ref_src=twsrc%5Etfw">January 12, 2020</a></blockquote> <script async src="https://platform.twitter.com/widgets.js" charset="utf-8"></script> <p>Insect swarms pose several threats to aircraft including potential damage of engines, blockage of intake points, and obstruction of windscreens and landmarks on the ground.</p> <h2 style="font-size:16px;">Shooting locusts in Somalia</h2> <p>Farmers in Somalia last month appealed to their government and the international community to protect their crops from an overwhelming invasion of locusts.</p> <p>“Locusts already ate our grazing area so we are now fighting to save at least our farm, where we planted watermelon and beans. We aren’t able to protect them and we call on the Somali government and international community to help us,” said Jamad Mohamed, a farmer in Dhusamareb, the provincial capital of Galgadud, a semi-autonomous region.</p> <p>“Locusts devoured the whole area and have now reached our farm to eat our plants, as you can see. This is the end, we have nothing left to feed our children and we aren’t even able to buy from the market,’‘ said Jirow Qorhere, another Somali farmer in the region.</p> <p><span class="caps">FAO</span> says the insects have destroyed over 175,000 acres of farmland in Somalia and Ethiopia, threatening food supplies in both countries.</p> <p>While the conflict and chaos in the country has prevented the spraying of pesticide by airplane, which the <span class="caps">FAO</span> called the ‘ideal control measure’, media affiliated to terrorist group Al Shabaab reported that farmers were shooting at the large swarms using <span class="caps">PKM</span> rifles. </p> <p>An average swarm of locusts will destroy crops sufficient to feed 2,500 people for a year, according to the United Nations.</p> <h2 style="font-size:16px;">Kenyans mock minister over locust</h2> <p>In Kenya, the swarms made headlines when the agriculture minister was mocked on social media, for asking people to share photos of suspicious insects.</p> <p>Agriculture Minister Mwangi Kiunjuri told a press conference that the swarms had crossed the border from Somalia on December 28, and had now spread to northern Mandera and Marsabit, eastern Wajir and Garissa, as well as central Isiolo and Samburu.</p> <p>“We recognise that the pest invasion and potential to spread rapidly to other counties pose (an) unprecedented threat to food security and livelihoods in the country,” said Kiunjuri.</p> <p>Kiunjuri added that the best way to control the locusts would be to report their presence, adding that it was important that they weren’t being mistaken for other insects.</p> <p>‘‘If you see any insect which you suspect could be a locust, please take pictures and post on social media and they will reach us… so that we don’t have insects that are not locusts,’‘ the minister said.</p> <p>Kenyans instead took to social media to post all sorts of creatures, animals and insects, using social media to mockingly ask the minister to confirm whether these were locusts.</p> <blockquote class="twitter-tweet"><p lang="en" dir="ltr">Hi <a href="https://twitter.com/hashtag/Kiunjuri?src=hash&ref_src=twsrc%5Etfw">#Kiunjuri</a> I just spotted this in my backyard. Kindly confirm if it is a locust? <a href="https://t.co/TAkI0WxWPy">pic.twitter.com/TAkI0WxWPy</a></p>— Jean Litiema (@JeanLitiema) <a href="https://twitter.com/JeanLitiema/status/1215576968613322752?ref_src=twsrc%5Etfw">January 10, 2020</a></blockquote> <script async src="https://platform.twitter.com/widgets.js" charset="utf-8"></script> <p>Desperate measures have seen police deployed to shoot in the air and spray teargas at the critters, while residents clap their hands, whistle and bang bottles and cans together to try chase away the thick clouds of locusts, according to images obtained by <span class="caps">AFP</span>.</p> <p>However Kiunjuri said the government had obtained pesticides and two aircraft to spray affected areas, and hopes to soon have a third.</p>