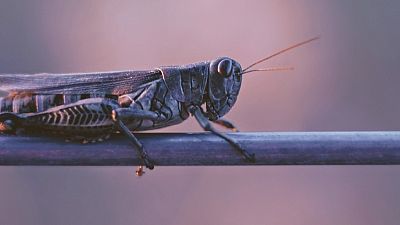 <p><strong>Large swarms of desert locusts are spreading through Kenya, after wreaking havoc in Somalia and Ethiopia, posing a significant threat to food security, the agriculture minister says.</strong></p> <p>“The first swarm (of locusts) crossed the border in to Kenya from Somalia on 28th December 2019. Other swarms (of locusts) continued coming in from Ethiopia, with additional ones from Somalia,” said Mwangi Kiunjuri, Kenya Minister of Agriculture.</p> <p>Kiunjuri also said that the government has managed to spray several large swarms of locusts and is currently tracking others with trained officers.</p> <blockquote class="twitter-tweet"><p lang="en" dir="ltr">Aerial spraying of desert locusts starts. <a href="https://t.co/pSUKghjkvy">pic.twitter.com/pSUKghjkvy</a></p>— Daily Nation (@dailynation) <a href="https://twitter.com/dailynation/status/1216327670105083905?ref_src=twsrc%5Etfw">January 12, 2020</a></blockquote> <script async src="https://platform.twitter.com/widgets.js" charset="utf-8"></script> <p>The locusts – part of the grasshopper family – have led to what the Food and Agriculture Organization (<span class="caps">FAO</span>) has termed the “worst situation in 25 years” in the Horn of Africa as the region is suffering its worst invasion for decades. Swarms formed in eastern Ethiopia and northern Somalia and have moved through the region, possibly still threatening South Sudan and Uganda. </p> <blockquote class="twitter-tweet"><p lang="en" dir="ltr">Locust invasion headache:<br /> <br /> Panic grips Mandera County as locusts invade Rhamu. Swarms of locusts descended on onion farms last night. Pests have also arrived in parts of Samburu County.<a href="https://twitter.com/hashtag/CitizenWeekend?src=hash&ref_src=twsrc%5Etfw">#CitizenWeekend</a> <a href="https://t.co/q4FJMcFp7G">pic.twitter.com/q4FJMcFp7G</a></p>— Citizen TV Kenya (@citizentvkenya) <a href="https://twitter.com/citizentvkenya/status/1216301926305931265?ref_src=twsrc%5Etfw">January 12, 2020</a></blockquote> <script async src="https://platform.twitter.com/widgets.js" charset="utf-8"></script> <p>Locusts can cover as much as 150 kilometers (93 miles) a day and an average swarm will destroy crops sufficient to feed 2,500 people for a year, according to the UN.</p>