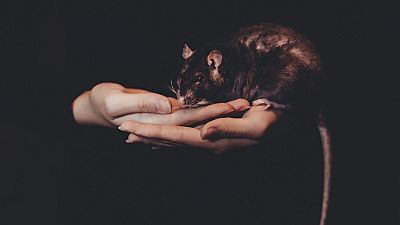 <p><strong>2020 is the Year of the Rat, which believers in Chinese astrology say could mean a more peaceful year, with lots of romance.</strong></p> <p>“2020 is a rat year, and it’s a specific kind of rat year, it’s a metal rat. The metal is one of the five elements in Chinese astrology. So there’s metal rat, water rat, wood rat, fire rat and earth rat. So the metal rat, the metal element, the qualities of the metal element are about sharpness, clarity and doing the right thing,” said Foon Chik, Feng Shui master and Chinese Astrologer.</p> <p>Known for their intelligence and affectionate nature, rats are increasingly kept as beloved pets, and for one enthusiastic rat-owner and author in the UK, they’ve even made their way into one of her books.</p> <p>“The rat is what’s called a romance creature in Chinese astrology, so when it’s a year for a romance creature they can be a time when love is in the air, lots of romance, but also the rat can bring about some sex scandals!” says Foon Chik, Feng Shui master and Chinese Astrologer.</p> <p>British writer, Marti Leimbach lives in the Berkshire countryside west of London with her family, and 36 rats. Leimbach is part of a group called the National Fancy Rat Society, which not only promotes the rat as a great pet, but also organises shows and competitions to show them off. and she currently working on a book about a young girl’s love for lab rats.</p> <p>Queen Victoria is rumoured to have introduced the idea of keeping rats as pets after her famous rat catcher, Jack Black, started to train them to do tricks.</p> <p>After a turbulent year for global politics last year, Chinese Astrologer Foon Chik says the rat could help calm things down in 2020.</p>