A Camtouch pen, a new stylus from a Ukrainian company with the same name has been unveiled at the going CES show in Las Vegas.

It comes with a smart projector that projects the movements of the stylus onto any surface as writing or drawing.

It can be used on walls, windows, ceilings and roads.

“Camtouch is a hand-held device that can turn any surface into an interactive type screen. It has sensor, a camera and a solid stylus. Our customers call it a magic wand because it turns any surface interactive”, Anastasiia Liubiashcheva, Camtouch marketing manager said.

The idea is to save teachers and professionals from bringing an interactive whiteboard to classes and meetings.

The Camtouch system can quickly be set up and used.

It is being shown internationally for the first time at the CES technology show in Las Vegas and it is available for worldwide shipping for $349.

“So, our main target audience is educational institutions. As well as internal studying in any enterprises and big companies”, she added.

The show floor is now open to a wider audience until Friday January 10. 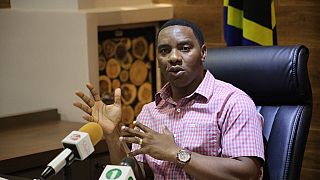