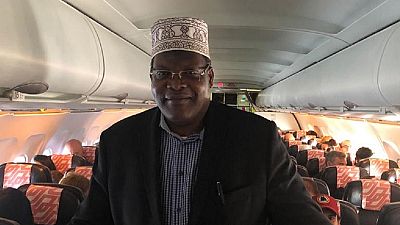 Kenya’s maverick politician, Miguna Miguna, says he has had to travel between five countries in a bid to return to his country of birth.

The former ally of former Prime Minister Raila Odinga left Canada with the hope of flying to Kenya after over a year of forced exile. But on reaching Europe, most carriers have refused to transport him citing a government red alert.

“In the last 3 days Despot Uhuru Kenyatta has forced me to traverse 5 countries – Canada, Germany, Austria, France and Switzerland – in search of a PATHWAY to my village, Magina, in Kano Plains, Kenya, where my placenta was buried. I will be home no matter how long it takes. Viva!,” he wrote on Twitter.

I must enter Kenya unconditionally as a Kenyan.

He was denied boarding by Air France and Lufthansa, both airlines citing a government instruction to not carry him into Kenya. The operators insist it is standard procedure but Miguna disputes their claims.

The government having issued a statement early this week saying it was ready to cooperate with Miguna’s return has reiterated that position via the Interior Ministry, a court was told today.

Meanwhile, a section of Kenyans on social media are calling out the government over the handling of an issue that they have given the all-clear to take place.

The Kenyan government on Monday said it would facilitate the return of vocal opposition politician, into the country, following court orders to that effect.

Despite government assurances to facilitate his return in a document from the Immigration authorities, the politician is blaming the government for playing hid-and-seek with his return.

Miguna posted on Twitter Tuesday morning from Berlin that he had been stranded in Berlin because of a government red alert to Lufthansa warning them to not carry him on a scheduled flight. Government denied the claim.

“I’m exploring all my options. I’ll communicate when and how I will travel to Kenya later today or tomorrow. Meanwhile, I urge all my supporters, freedom fighters and genuine human rights defenders to remain focused and unbowed. Mobilize for a huge homecoming to shame the despots,” he tweeted.

The Office of the President issued a RED ALERT to Lufthansa last evening threatening to deny landing rights to the airline if it carried me to Kenya or any other African country. It was issued AFTER the Court Orders by Justice Korir. I’m still at the TXL airport in Berlin. pic.twitter.com/mBPnU13y0I

It is the latest twist for forcibly exiled Miguna whose headaches started after his role in the symbolic inauguration of then opposition leader Raila Odinga in January 2018, he was deported in February that year. His attempt to return on March 26, 2018 was not successful.

“This is to confirm that in compliance with the court orders issued on December 14, 2018, the directorate will facilitate Dr Miguna’s entry into Kenya,’‘ Director of Immigration Alexander Muteshi said in a statement on Monday.

Justice Weldon Korir ordered authorities to facilitate Miguna’s re-entry on the basis of his identification through his national identity card or his withheld Kenyan passport.

Miguna had filed the application last week, stating that he was due to return to the country on January 7, aboard Lufthansa flight LH 590.

My flight departs from Frankfurt and arrives at the JKIA, Nairobi, on Tuesday, January 7, 2020 at 9:25 p.m., as scheduled, God willing. There is no change. Pursuant to Justice Korir’s ORDER of January 6, 2020, I will and must enter Kenya UNCONDITIONALLY as a Kenyan. See you soon! pic.twitter.com/MF3jOdNr7I

Government spokesperson Colonel (Rtd) Cyrus Oguna had earlier confirmed that Miguna would be allowed to return to the country, as long as he has valid travel documents.

“The head of state made a pronouncement that he is free to come back. That is still the government’s position. Had new realities or dynamics emerged after the head of state spoke, they would have been made public,’‘ Oguna said.

“He must have valid travel documents like any other Kenyan or traveller.’‘

Oguna was referring to president Uhuru Kenyatta’s remarks last week, when he said every Kenyan has a right to freedom of expression.

‘‘I have heard that some people are now planning to fly into the country. Let them come because that is their freedom,’‘ Kenyatta said in what was seen as a veiled reference to Miguna.

Miguna has issued several demands ahead of his return to Kenya including granting his lawyer ‘full access to all immigration and port of entry areas, where he will be processed’.