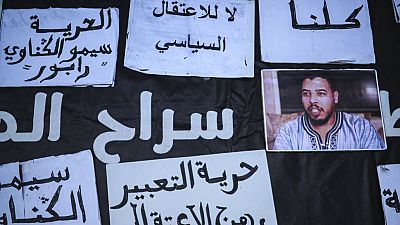 <p>Moroccan authorities have sentenced a Youtuber who criticized the king to prison, and detained a journalist-activist who defended anti-government protesters in a tweet.</p> <p>Freedom of speech advocates say the moves Thursday reflect growing pressure against those who use social networks to express anger at economic and social problems.</p> <p>A court in Settat handed a four-year prison sentence to Mohammed Sekkaki for referring to Moroccans as donkeys and criticizing King Mohammed VI, in a video posted on YouTube in November. The royal family is widely revered in Morocco, and criticizing the king is a criminal offense.</p> <p>Also Thursday, journalist and activist Omar Radi was detained in Casablanca and charged with insulting a judge. Radi’s arrest was apparently prompted by a tweet six months ago criticizing a Moroccan court’s decision to hand maximum prison sentences to leaders of mass demonstrations in the poverty-stricken northern Rif region.</p> <p>The Casablanca court refused to grant Radi bail pending the next hearing Jan. 2, said activist Khalid El Bekkari, who was in the court when Radi was charged. If convicted, Radi could face up to a year in prison and a 500 euro ($555) fine. It was unclear why the arrest occurred so long after the original tweet.</p> <p>Radi was also part of Arab Spring protests in Morocco in 2011 that pushed against corruption and abuse of power and limits on free speech, and he has continued to defend human rights since then.</p> <p>Morocco, long known for its stability in the Arab world, adopted constitutional reforms in response to the Arab Spring, but the country is still struggling with poverty, corruption and unemployment.</p> <p>Freedom of expression is guaranteed in the Moroccan constitution, but with limits. Authorities say some social media users are pushing those limits too far, sometimes for personal gain.</p> <p>But rights activists say authorities are trying to cover up their inability to solve Morocco’s problems.</p> <p>“There is a strong escalation against freedom of expression by authorities, shown by the successive arrests and trials of bloggers and social media users to express their anger over the deteriorating social and economic conditions,” the Moroccan Freedom Now association said in a statement after Radi’s arrest.</p> <p>Last month a rapper known as Gnawi went on trial over a video in which he insulted the police. His supporters viewed his arrest as punishment for another, hugely popular YouTube video that rages against Moroccan powers-that-be and criticizes the country’s widening economic gap.</p> <p>In September, a Moroccan journalist was sentenced to prison on charges of undergoing an illegal abortion after becoming pregnant while being single. Hajar Raissouni denied having had an abortion and said the arrest was prompted by her work. The case drew widespread attention, and she was later freed in a royal pardon.</p> <p><strong><em>AP</em></strong></p>