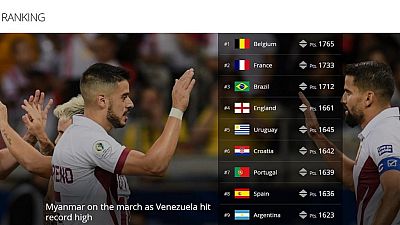 <p><strong>African nations including Algeria, Nigeria, Madagascar, Lesotho and South Africa were among some of the biggest points winners on the football rankings by global governing body <span class="caps">FIFA</span> for the year 2019.</strong></p> <p>African champions Algeria, gained 135 points during the year, a tally only lower than Asian champions and 2022 World Cup hosts Qatar. Algeria consequently moved up 32 ranks to 35th best ranked team in the world and 4th on the continent.</p> <p>Nigeria and Madagascar were seventh and tenth respectively on the list of nations that won the most points over the last 12 months.</p> <p>South Africa was among the few teams that managed to improve their rankling from 2018 to 2019, moving up by one place from 71st Lesotho also moved up by one place from 139th. </p> <p>Confederation of African Football (<span class="caps">CAF</span>) will also be celebrating the addition of one African team into the top 50, having 4 teams represented up from 3 in 2018.</p> <p>Belgium maintained their top spot and became <span class="caps">FIFA</span>’s team of the year for the second year in a row, ahead of World Champions France and Brazil in 2nd and 3rd respectively.</p> <h2 style="font-size:16px;">Africa’s top ten</h2> <ul> <li>Senegal 20 (1st on the African continent)</li> <li>Tunisia 27 (2nd)</li> <li>Nigeria 31 (3rd)</li> <li>Algeria 35 (4th)</li> <li>Morocco 43 (5th)</li> <li>Ghana 47 (6th)</li> <li>Egypt 51 (7th)</li> <li>Cameroon 53 (8th)</li> <li>Mali 56 (9th)</li> <li>DR Congo 56 (9th)</li> </ul> <a style="font-size:16px; font-color:yellow;" href="https://www.fifa.com/fifa-world-ranking/ranking-table/men/#CAF"target="_blank"><span class="caps">READ</span> <span class="caps">MORE</span>: <span class="caps">FIFA</span> Rankings for African teams</a> <p>In the <a href="https://www.fifa.com/fifa-world-ranking/ranking-table/women/"target="_blank">women’s rankings,</a> African champions Nigeria are the top ranked team on the continent at the 39th place, while Cameroon, South Africa, Ghana, Ivory Coast and Equatorial Guinea complete the top 5 for Africa, ranking 49th, 55th, 60th, 63rd and 71st respectively.</p> 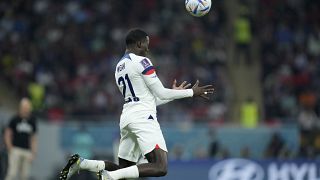