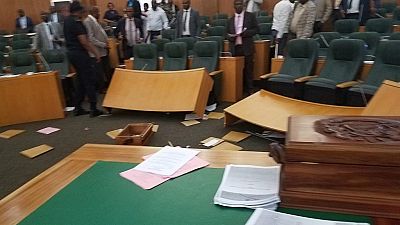 Members of Parliament, MPs, in Lesotho were involved in chaotic exchanges on Thursday arising from the decision of the Speaker to suspend sitting over controversial trade regulations.

Reports indicate that opposition MPs were demanding the appearance before the house of Chalane Phoro, Minister for Small Business Development, Conservatives and Marketing.

The MPs had expressly demanded him to appear to give clarity on wool and mohair regulations that had seen farmers protest over the local broker appointed by government for their produce.

MPs on both sides of the house in videos posted on social media are seen hurling stationery and chairs at each other. A number of them actually engaged in fisticuffs in the middle of the chamber.

A member was reportedly injured with blood spluttered sheet being carried around by one of the MPs. The floor of the house was in disarray with broken furniture and documents all over the place.

A journalist who covers the country added that aside the trade issue, a failed motion of no confidence aiming to curtail powers of the Prime Minister and a call for snap elections had contributed to the altercation.

Anarchy in Lesotho’s parliament. When shall we develop our mother land; while we are busy with petty politics. pic.twitter.com/Rix8DnVTwT

Historically, Lesotho’s farmers sold their wool and mohair to a broker in next door South Africa but the government ordered a local brokerer for the purpose which led to protests.

Lesotho’s legislative chaos follows in that of South Africa and Uganda in the last few years. South Africa’s Economic Freedom Fighters, EFF, caused their violent expulsion from the parliament at a time they were opposing the continued stay in office of the former president Jacob Zuma.

Over in Uganda, the legislative plans by MPs to amend the laws to allow President Yoweri Museveni to extend his stay in office led to violent scenes. Military officers were deployed into the chamber as opposition MPs were violently thrown out.

Despite the stiff opposition, the term limit law was passed by the house with a Constitutional Court ruling affirming the amendment which allows Museveni to seek another term when next elections are held.

More violent footage of the bloody scenes in #LesothoParliament emerge. The wool & mohair, motion of no confidence and curtailing powers of PM to cal snap elections after losing vote led to the altercation. TheGlobe_404 MorningLiveSABC Sophie_Mokoena pic.twitter.com/PFqRxodzKX