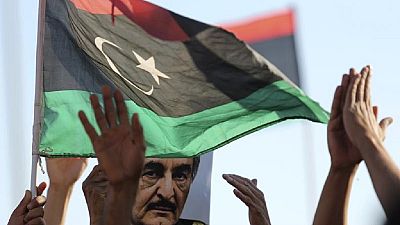 <p>An agreement between Libya’s warring parties to end their conflict is possible, but only if all Libyans reject outside interference, the U.N. envoy for the oil-rich North African nation said Monday.</p> <p>Ghassan Salame told the Security Council that preparations for an international summit in Berlin are underway and that a “crucial” meeting of senior officials Wednesday aims to reach agreement on an outline of actions needed to end the conflict. </p> <p>These include a return to the Libyan-led peace process, a cease-fire, implementation of the arms embargo against Libya, security and economic reforms, and upholding international human rights and humanitarian law, he said.</p> <p>A civil war in Libya in 2011 toppled Moammar Gadhafi, who was later killed. In the chaos that followed, the country was divided, with a weak U.N.-supported administration in Tripoli overseeing the country’s west and a rival government in the east aligned with the Libyan National Army led by Gen. Khalifa Hafter, each supported by an array of militias.</p> <p>Hafter launched a surprise military offensive April 4 aimed at capturing Tripoli despite commitments to attend a national conference weeks later aimed at forming a united government and moving toward elections. Fighting for Tripoli has stalled in recent months, with both sides dug in and shelling one another along the city’s southern reaches.</p> <p>The Libyan National Army is the largest and best organized of the country’s many militias and has the support of Egypt, the United Arab Emirates and Russia. The Tripoli-allied militias, on the other side, are aided by Turkey and Qatar.</p> <p>Salame told the council that since the beginning of the conflict more than 200 civilians have been killed and more than 128,000 people have fled their homes. Over 135,000 civilians remain in front-line areas, and an additional 270,000 people live in areas directly affected by conflict, he said.</p> <p>The weeks ahead will be critical, Salame said, adding that he is “determined to see the end of this debilitating conflict.” He told the council in a video briefing from the region that “ending the conflict and agreeing to the way forward is a realistic prospect.”</p> <p>But he cautioned that the violence is being fueled by a growing involvement of mercenaries and fighters from foreign private military companies. He also pointed to drone strikes and aerial attacks by foreign supporters of the warring sides.</p> <p>“External investment in the conflict risks surpassing the amount of national involvement, taking control of Libya’s future away from the Libyans and putting it in the hands of foreign parties,” he warned. “Once invited in, foreign intervention is the guest that settles and seizes control of the house,” the U.N. envoy added.</p> <p>Further, he said, “The violence is facilitated by Libya’s plethora of Gadhafi-era arms as well as by continued shipments of war material brought into the country in breach of the arms embargo,” ranging from spare parts for fighter aircraft and tanks to bullets and precision missiles.</p> <p>Salame urged all Libyans to reject outside interference in their country’s affairs and to urge outside countries to implement the arms embargo “and commit tangibly to ending the conflict on the ground, before it’s too late.”</p> <p>He said the outlines of an agreement are known, options for a constitutional framework exist and electoral legislation has been produced before.</p> <p>“All that is needed now is for you, the international community, to come together to provide the necessary umbrella for the Libyan parties themselves to join hands to end the conflict and resume dialogue,” Salame said.</p> <p><strong><em>AP</em></strong></p>

External investment in the conflict risks surpassing the amount of national involvement, taking control of Libya’s future away from the Libyans and putting it in the hands of foreign parties.