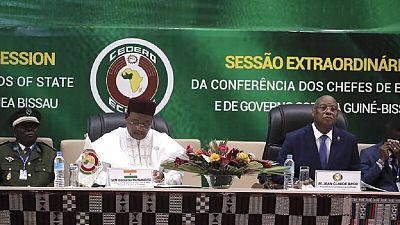 Guinea-Bissau’s newly appointed Prime Minister Faustino Fudut Imbali handed in his resignation on Friday after an ultimatum was given by West African regional bloc ECOWAS, the president said.

Vaz, who is running again in the Nov. 24 poll, dissolved the government saying the political situation was undermining the normal functioning of state institutions in the West African country.

But regional bloc ECOWAS condemned the move, calling it illegal, and held an extraordinary summit on the Guinea-Bissau political situation in Niamey on Friday to pressure Imbali’s government to resign, threatening to apply sanctions if it didn’t comply.

ECOWAS also warned that any implication of the army or security forces would be considered a coup and also met with sanctions.

Instability in Guinea-Bissau has typically taken the form of military coups, led by officers drawn mostly from a narrow military elite who fought for independence in 1963-1974.