Nobel honors the scientists that have revolutionised mobile phones 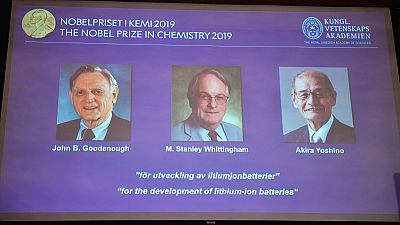 “So it’s really a hard job to make a new good battery. Yet, that is exactly what our three laureates have done. They have taken on this challenge and their discoveries have led to the development of the phenomenal, fantastic lithium-ion battery. So what is this all about then? Well, as you can see the name reveals it, this is about lithium, and to the left here you have a small piece of the periodic table and you can see that lithium in the red box has atomic number 3 and it’s a very small element and it’s actually the lightest metal we have,” announced Olof Ramstrong, member of Nobel Committee for Chemistry.

Three scientists won the 2019 Nobel Prize for Chemistry on Wednesday (October 9) for developing and refining rechargeable lithium-ion batteries which made the global information technology, mobile and fossil-fuel free revolutions possible.

“I think the significance is in our everyday applications that we are going to mobile technologies and we are also moving away from fossil fuels with this technology,” said Peter Somfai, a professor of organic chemistry and a member of the Nobel committee for chemistry.

I think the significance is in our everyday applications that we are going to mobile technologies and we are also moving away from fossil fuels with this technology.

American John Goodenough, at 97, became the oldest winner of a Nobel prize and shares the 9 million Swedish crown (906,000 U.S. dollar) award equally with Stanley Whittingham from Britain and Akira Yoshino of Japan, the Royal Swedish Academy of Sciences said.

In its citation, the academy’s Nobel committee said lithium-ion batteries had revolutionised our lives since they first entered the market in 1991, laying the “foundation of a wireless, fossil fuel-free society, and are of the greatest benefit to humankind”.

Whittingham developed the first functional lithium battery in the early 1970s. Goodenough doubled the battery’s potential in the following decade and Yoshino eliminated pure lithium from the battery, making it much safer to use.

Peter Somfai, a professor of organic chemistry and a member of the Nobel committee for chemistry, said it was clear why the three won, and that the technology would be further refined in the future for example by allowing energy to be produced in one place and then used in another.

“This battery has had a dramatic impact on our society and it’s very clear that the discoveries of our three laureates really made this possible, so it’s really been to the very best benefit of humankind,” said Olof Ramstrong, member of Nobel Committee for Chemistry.

The prizes for achievements in science, literature and peace were created and funded in the will of Swedish dynamite inventor and businessman Alfred Nobel and have been awarded since 1901.

The Nobel prizes for medicine and physics were awarded earlier this week. The awards for literature, peace and economics will be announced in the next few days.