A consequence of war and social unrest in the Middle East and North Africa in recent decades, has been the destruction of some of the region’s most ancient, treasured and culturally important monuments.

A pioneer in the field of preserving and restoring them is Dr Shadia Touqan, a conservationist and architect who is director of the Arab Regional Centre for World Heritage.

To protect future generations of Arab heritage, Touqan’s institute educates communities and governments about emergency preparedness, to mitigate the disaster risk to their prized buildings, mosques and churches.

Upon a recent visit to Abu Dhabi, the conservationist told Rebecca McLaughlin-Eastham how architects and environmental scientists must work closely together to safeguard the region’s historical sites.

She also spoke of how the involvement of a local community helps rebuild hope and a sense of togetherness, as with the UNESCO restoration of the famous 8th century, leaning minaret of Mossul’s Al Nuri mosque which was destroyed by ISIS in 2017.

The rebuilding project, towards which the UAE government has contributed $50 million, began last year.

Rebecca McLaughlin-Eastham: Dr Shadia, talk to me about the number of historical monuments, sites – even nature reserves – that are on your endangered watchlist here in the Arab world.

Dr Shadia Touquan: There is about 22% of the 84 sites that were inscribed on the World Heritage List initially, and a number of them have been put on the “in danger” list. This includes four sites in Palestine, that includes Jerusalem too, Hebron, Bethlehem and also the Battir landscape. You also have Aleppo, and now like 60 percent of the urban fabric was destroyed and a number of people lost their homes, as they did in Mosul. You have also cities like Sana’a, Shibam and Damascus.

RME: To what degree, when you are rebuilding a site that has been destroyed, can you use local labour, local architects, even local materials? Can you give something back to the local economy?

ST: That’s one of the main objectives actually, to use the local skills, the local labour – both skilled and unskilled craftsmen.

If you restore a symbolic monument like the minarets of Al Nuri mosque, or a church or a public square, they feel a connection and a feeling of belonging.

RME: You’re often working within complex communities – divergent societies with more than one religion. How much of a challenge, therefore, is managing expectations and securing that community’s involvement in your projects?

ST: We can actually involve a community in decision making, by taking their opinion about how to handle one thing or another – technically or otherwise. But one thing is for sure, you must have people who are mentally healthy. People who have not been subject to trauma, who are not scared or made to feel vulnerable to attacks or to loss of life.

RME: Tell me about one of your success stories, particularly in Lebanon.

ST: The success of the National Museum of Beirut, that was quite something.

The building itself was completely destroyed and the word ‘reconciliation’ was taboo. The director, who’s sadly passed away now, decided to create a wall and put everything in the [antiquities] store behind it. So, when the fighters came to the museum, they didn’t realize there was anything there.

He was risking his own life and that is a beautiful message. You learn from people who are living in such historic sites.

Dr Touqan works in partnership with UNESCO, which strives to ensure that no culture or religion is underrepresented in the conservation of historic treasures.

Projects receiving investment from UNESCO, and its partners in the Middle East, include Saudi Arabia’s Nabatean carved sandstone city of Al Hijr and Syria’s conflict-ravaged ancient city of Aleppo, with its 12th century Great Mosque.

To help pay for such projects, there’s UNESCO’s World Heritage Fund of public and private contributions.

Created in 1972, it receives around US$4 million each year which it allocates to sites requiring urgent conservation.

Since 1978, more than 2098 requests for international assistance have been granted, with Arab states accounting for around 12% of submissions.

During a trip to the UAE, Lazare Assomo, the Deputy Director of UNESCO’s World Heritage Centre, told Inspire there were two fundamental questions governments looking to rebuild their cities in the aftermath of war had to ask on behalf of their communities.

“How do we come back together and how do we recover from this?” he says. “There, heritage becomes important because with heritage we recreate the environment in which recovery can be possible – and a sustainable healing process.”

Assomo believes that in the coming decade technology will continue to increase the pace of redevelopment and historic restoration in the Middle East and North Africa.

“A couple of years ago, when we wanted to go to visit a site or to document a site, it would take us years of work,” he says. “Today, the same work can be done using drones, even a simple smartphone. And I think Artificial Intelligence has provided us with such a great opportunity to even do more.” 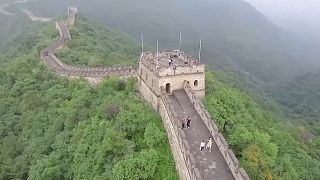