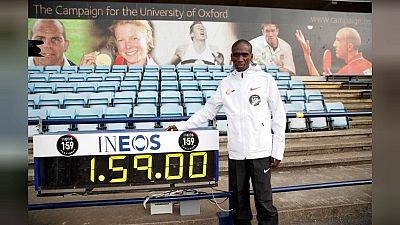 Kenyan world record holder Eliud Kipchoge says running a marathon in under two hours would be comparable in the annals of human achievement to standing on the moon or scaling Everest for the first time.

The 2016 Olympic marathon gold medallist, speaking to reporters from his home training camp in Kaptagat on Wednesday, was sure he too could enter uncharted territory in Vienna on Oct. 12.

“It’s like stepping on the moon, going up the tallest mountain and even going to the middle of the ocean,” said Kipchoge who ran 2:00.25 in his previous non-world record attempt at Italy’s Monza motor racing circuit in 2017.

It’s like stepping on the moon, going up the tallest mountain and even going to the middle of the ocean.

“I have no doubts at all,” added the 34-year-old, who said he also wanted to make history before next year’s Tokyo Olympics.

INEOS have yet to provide details about race day plans and identities of the official pacesetters in the 1:59 challenge www.ineos159challenge.com.

The conference call, on a line that was at times barely audible, was restricted to questions about Kipchoge’s preparations.

Norwegian brothers Henrik, Filip and Jakob Ingebrigtsen told national broadcaster NRK this week, however, that they had been approached to run as pacesetters.

This year’s world athletics championships in Doha end on Oct. 6.

“Marathon is no longer an individual event, it’s a team event,” said Kipchoge, who set the world record of 2:01.39 in Berlin last September. “The pacemakers are playing a key role in my quest.”

Any sub-two hour time will not be ratified for record purposes by the IAAF, the governing body of athletics, because of the use of pacemakers and other aids but Kipchoge was unconcerned.

“I think it’s about history, about leaving a legacy,” said the Kenyan. “So I am going to make history and leave a legacy. It’s not about making a world record.

“I am already a record holder for marathon… I think I have done that. This is for the human family.”

“What has changed is mental preparation,” he said. “I am really better prepared mentally… this time I know what will happen.”

“Certainly I am feeling good,” he added.

Kipchoge said he planned to arrive in Vienna about a week before the attempt and will jog over the 4.3km Prater Hauptallee course.