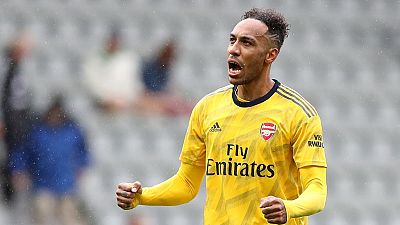 Arsenal got to a winning start in the English Premier league thanks to a goal by Gabonese international Pierre Emerick Aubameyang. He was also voted Man of The Match.

The forward’s 58th minute strike was the difference between visiting Arsenal and their hosts Newcastle United. The game was Aubameyang’s 50th league appearance.

It effectively means, the league’s reigning top scorer has started the season and his defense of the golden boot on a good note.

In the 2018/2019 season, he emerged joint top scorer with 22 goals along with two other African compatriots: Senegal’s Sadio Mane and Egypt’s Mohamed Salah – both with Liverpool.

Another African involved for Arsenal on the day with new Ivorian signing Nicolas Pepe. Pepe whose transfer from Lille to Arsenal made him Africa’s most expensive signing was officially Arsenal’s 200th player in the league.

Arsenal placed fifth last season and lost the Europa League final to Chelsea. This season, Unai Emery’s side will still play in the Europa League with sights on Champions League football – i.e. a top four finish.