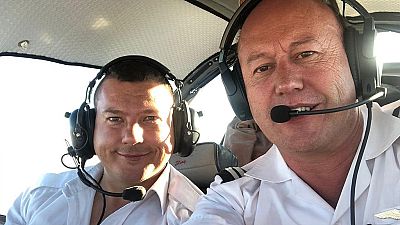 A light plane crashed in western Tanzania on Saturday, killing two South Africans who had been involved in last month’s successful attempt to fly a home-built aircraft from Cape Town to Cairo, officials said.

The crashed Sling plane, which entered Tanzanian airspace from Uganda en route to Malawi, made a distress signal about engine failure before disappearing from radar, according to the Tanzania Civil Aviation Authority (TCAA).

“The pilot and passenger, both South African citizens, were killed in the plane crash that occurred shortly after take off from Tabora airport at around 7:30 am,” Sikonge district commissioner Peres Magiri told ITV television station.

The plane was destroyed by fire after the crash and only the engine and some other parts were recovered. It was owned by a South African organisation known as U-Dream Global.

On the group’s Facebook account, it said the Tanzanian accident involved the flight support aircraft for the Cape to Cairo Challenge and that project directors, Des Werner and Werner Froneman lost their lives. No one else was involved in the accident, U-Dream Global said.

South Africa’s Department of International Relations and Cooperation said it has activated its consular services to support affected families.

U-Dream Global, made international headlines in June when a group of students successfully built a four-seater Sling aircraft and then flew it from Cape Town to Cairo in July.

On its website, U-Dream Global is described as a not-for-profit organisation founded by teen pilot and motivational speaker Megan Werner in 2018.