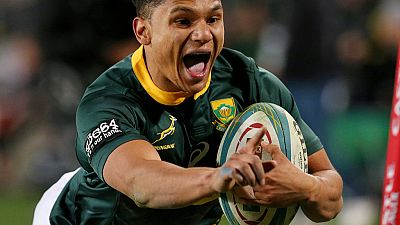 Replacement scrumhalf Herschel Jantjies scored a try in the final minute of play to help South Africa snatch a 16-16 draw with New Zealand in a tense Rugby Championship clash in Wellington on Saturday.

Jantjies pounced on an error by Aaron Smith to silence most of the soldout crowd, who had until the try been expecting a tight win for the world champions at the Wellington Regional Stadium.

Jack Goodhue scored the only try for the All Blacks after a scintillating break from Beauden Barrett, while the fullback and flyhalf Richie Mo’unga added the rest of the points from the boot.

Springboks flyhalf Handre Pollard kicked three penalties for the visitors, then held his nerve to slot the conversion that locked the scores at 16-16 and ended the game.

Jantjies, who scored two tries on debut against Australia last week, had replaced Faf de Klerk midway through the second half after the 27-year-old had a head injury assessment and did not return.

The All Blacks will also be sweating on the fitness of their lock Brodie Retallick, who looked in pain and cradled his left arm as he walked off in the 61st minute.

The match had been billed as one of experimentation by both teams as they finetuned their World Cup preparations and it was just as intense as their last three matches, which had been decided by two points or fewer.

Neither side was able to truly stamp any authority on their opponents, although South Africa’s tactical kicking game and brutal defence kept them in the game when the All Blacks looked to have gone up a gear in the final quarter.

Early pressure by the Springboks had resulted in two penalties to Pollard to give them a deserved 6-0 lead before the game turned into an arm-wrestle between the 22-metre areas.

It was not until the 37th minute before All Blacks passes finally stuck when Beauden Barrett found space following a turnover and he passed inside to Goodhue, who ran 30 metres to give the home side a 7-6 lead at the break.

Barrett and Pollard traded penalties in the third quarter, with the injection of replacement players sparking the world champions, who began to finally get over the advantage line out wide.

Mo’unga then added two further penalties, the second to give the All Blacks a 16-9 lead with six minutes remaining before a fortuitous bounce of the ball off Smith while under pressure gave Jantjies the try that levelled the match. 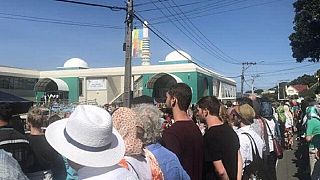