<p>Some 200 homes destroyed following a massive fire in the Callo district of Lima, Peru, Thursday, Local officials said.</p> <p>Flames could be seen consuming whole swaths of neighbourhoods in the port area of Peru’s capital as firefighters and locals battle the blaze.</p> <p>Larry Lynch is Deputy Commander of area firefighters.</p> <p>“There are more or less 150 to 200 homes that have been burned here. There are five passageways here, this whole area has an average of more or less 1,500 square meters (16,146 square feet) (made of) rustic material like wood and cardboard, and that has meant that we weren’t able to initially control the fire and right now we’re trying to control it so it doesn’t spread to the other homes in the area”, Lynch said.</p> <p>A local resident recounts the incident.</p> <p>“I have a family member that lives here, but the whole fire started at 3:30 in the morning. So, I came out of my house and started to yell and when people had come out it was already too late because their whole home was going up in flames”, Rocio Lima said.</p> <p>There have been no reports of casualties according to local media.</p> <p><strong>Reuters</strong></p>

There are more or less 150 to 200 homes that have been burned here. 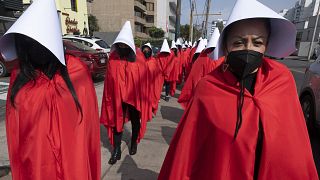