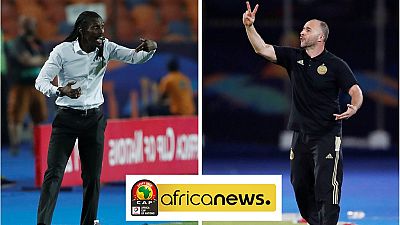 The July 19 final of the African Cup Of Nations, AFCON, in Egypt will be between the Teranga Lions of Senegal and the Fennecs, i.e. the Desert Warriors of Algeria.

In the area of individual match-ups, it is touted as a game between the two skippers of the side. Sadio Mane of Senegal and Riyad Mahrez of Algeria. Some have even extended it to their respective clubs: Liverpool vs. Manchester City.

But while Mane and Mahrez turn out to be the men leading the men on the field of play, the tactical and technical leaders are the respective managers – Djamel Belmadi and Aliou Cisse.

For the first time in a long while, it is clear even before the final kicks off that a local coach will be winning the trophy.

The radical changeover of Belmadi

After a turbulent period which saw Algeria employ seven coaches in three years, it has taken Djamel Belmadi less than one year to restore order and turn a dispirited squad into finalists at the Africa Cup of Nations (AFCON).

Although he had only coached in Qatar before taking the job, Belmadi has lifted the “Desert Foxes” out of their rut and turned them into the most impressive side at the tournament with five wins and a draw, 12 goals scored and two conceded, on their way to Friday’s final against Senegal.

Belmadi has managed to bring out the best in a talented squad and maintain a ruthless streak.

Belmadi, 43, has also succeeded in lifting the pressure on their top player Riyad Mahrez, allowing him to be a pivotal figure but without expecting him to run the show.

“I do not like highlighting players. We need to put a little less focus on Mahrez if we want to make this a big tournament for us,” he said at the start.

Belmadi himself was a gifted midfielder, who could unlock defences with his passing, in a playing career which took him to 10 clubs in France, England and Qatar, including Olympique Marseille and Manchester City. He also played 20 times for Algeria, scoring five goals.

Algeria’s only previous AFCON title was in 1990 on home soil and Belmadi has told his players they have a chance to do something that not even Lakhdar Belloumi and Salah Assad, who helped put Algerian football on the map in the 1980s, managed.

Cisse – a losing finalist as player to potential winning manager

This is Senegal’s only second AFCON final since the competition was established and in both finals, one name has been a crucial element in the side, the name Aliou Cisse.

Cisse was the final in Mali 2002 when the Teranga Lions missed a chance to become champions, losing out to Cameroon’s Indomitable Lions. Cisse missed his spot kick after the game travelled into extra time and eventually penalty kicks.

This is Cisse’s second AFCON since taking over the reins as head coach in 2015. He led the team to the 2017 AFCON in Gabon and in 2018 to the World Cup in Russia.

In Gabon, the team failed to make the final but he was retained in the role. His team came close to being the only African country to make it out of the group stages in Russia.

“I feel very proud. We haven’t reached the final since 17 years. This is the fruit of a long time preparation. Those players worked hard for five full years and now we get the fruit of this hard work.

“Football is always charming. At a moment you think you lost control over the game and fate will do it all. Against Tunisia it was like that. This is a game for history” he added.

He kick started his professional career in France playing for clubs as Paris Saint-Germain, Montpellier, Lille and Sedan.

He also played in England featuring for clubs like Portsmouth, and Bolton Wanderers. He retired from club football in 2009 at the age of 33. Coaching was next and he got his biggest job in 2015, four years on he could win the AFCON.

The 43 year-old who captained Senegal in 2002 FIFA World Cup admitted pressure is not something strange for him. “Pressure is a part of the game, it is a part of my work. I played football since I was 12, and had always felt the pressure since then.

“I am not thinking of the final now, I’m just happy that I made Senegal’s people happy.”

The final will be a rematch between the two sides, Algeria defeated Senegal 1-0 when both sides met in Group C three weeks ago. For the Teranga Lions, the final will be payback time which will mean a historic victory.

“I have unlimited trust in my players and I felt they want to achieve something. They did all what is needed to win. This generation is better than the 2002 one. My players told me they will be better than us, and they did.

“My relationship with them is like father-sons one. When I became their coach in 2015 I told them our target is to reach the FIFA World Cup and the Africa Cup of Nations final. That was the way to convince Kalidou Koulibaly to play for Senegal instead of France. Now here we are.”