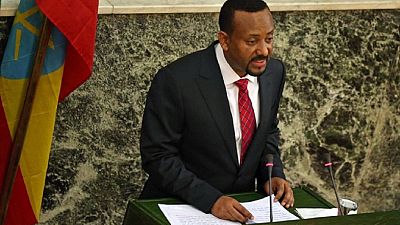 <p><strong>Ethiopia’s prime minister Abiy Ahmed on Monday briefed lawmakers on the state of the country, covering various issues ranging from the recent attempted coup in Amhara to economic liberalisation plans.</strong></p> <p>Abiy, who embarked on political, economic and social reforms when he took office in April last year, has been lauded and equally criticised for the pace at which he is trying to open up the previously state-controlled and restrictive regime.</p> <h2 style="font-size:16px;">On the economy</h2> <p>The premier said the economy expanded at 9.2% in year 2018/2019 fiscal year, up from a growth rate of 7.7% the previous year.</p> <p>In a bid to fight the crippling problem of unemployment, Abiy said the created jobs for about 1.4 million people last year. He however added that there are more than 11 million jobless Ethiopians and the figure increases by two million each year. </p> <p>To breathe new life into the economy, the government has agreed to privatise state-owned enterprises, in a bid to attract foreign investment. Ethio-telecom and sugar development projects are scheduled to be privatised first, before investors can be welcomed into power generation, railways, logistics, industrial development, and the prestigious Ethiopian airlines.</p> <p>Foreign direct investment (<span class="caps">FDI</span>), loans and remittance increased by 20% compared to the same period last fiscal year, Abiy said.</p> <h2 style="font-size:16px;">Securing reforms</h2> <p>Abiy reiterated his government’s commitment to opening up the political space, saying more than 45,000 individuals have been granted amnesty as part of democratic reforms.</p> <p>The government also removed internet restrictions on 260 media and websites, while at least 10 previously exiled political parties have returned home ahead of next year’s elections.</p> <p>Reforms are being implemented in several state institutions including the electoral commission, the human rights commission and security agencies.</p> <h2 style="font-size:16px;">Ethnic tensions and displacement</h2> <p>Commenting on the recent killing of high-ranking government officials in Amhara and Addis Ababa, the prime minister re-echoed the official government position condemning the attempted coup.</p> <p>“Any attempt to seize power through guns and not the ballot box will take Ethiopia a hundred years backwards,” he said.</p> <p>‘’…whereas asking for constitutional change is a constitutionally guaranteed right, but threatening to change the constitution is unacceptable.’‘</p> <p>Abiy added that security agencies working to secure the country had arrested over 1,000 individuals, including government officials suspected of instigating communal violence, money laundering, human trafficking, economic sabotage and terror related offenses.</p> <p>Rejecting reports that the government is forcing people to return to their homes, Abiy said government managed to return over 2.1 million people to their areas of origin. </p> <a style="font-size:16px; font-color:yellow;" href="https://www.africanews.com/2019/06/21/ethiopia-govt-warned-against-delaying-2020-polls/"target="_blank"><span class="caps">SUGGESTED</span> <span class="caps">READING</span>: Ethiopia govt warned against delaying 2020 polls</a>