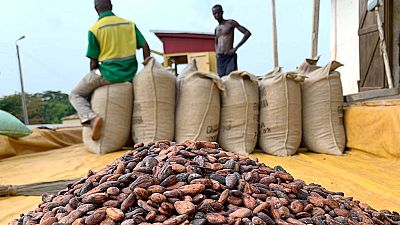 Ghana and Ivory Coast on Wednesday announced that they had won concessions from stakeholders in the cocoa industry, including acceptance of a $2,600 floor price for a tonne of cocoa.

The two nations had threatened to stop selling their production to buyers unwilling to meet a minimum price.

Following a two-day meeting called by the two top cocoa producers who together account for over 60% of the world’s production, Joseph Boahen Aidoo, chief executive of the Ghana Cocoa Board, told a news conference that their demands had been accepted in principle by the participants.

Over the years it has been the buyers who have determined the price for the suppliers.

“Ivory Coast and Ghana have suspended the sale of the 2020/2021 crop until further notice for preparation of the implementation of the floor price,” he said.

“Over the years it has been the buyers who have determined the price for the suppliers.”

Aidoo added that there would be a follow-up meeting to work out how to implement the agreement.

The world’s chocolate market is worth around $100 billion, of which only $6 billion go to cocoa producers.

Ghana and Ivory Coast, who are the world’s top two cocoa growers on Tuesday suspended the sale of cocoa beans to the open market under the 2020/2021 crop season until further notice.

The suspension, announced to stakeholders in the cocoa value chain, including traders, processors and chocolate manufacturers, is part of efforts by the two countries to get a fair price for farmers, according to news channel, Graphic Online.

The two countries had earlier proposed a floor price of $2,600 for every tonne against the International Cocoa Organisation’s price that is averaging $2,436.

Ghana and Ivory Coast who account for 65% of global cocoa supplies, argue that the current pricing structure that makes cocoa producers price takers does not reflect their contribution to the sustenance of the cocoa industry.

A formal decision on the floor price is expected on Wednesday, as the two producers take on almost 300 representatives of stakeholders in the cocoa value chain, by categorically agreeing that neither Ivory Coast nor Ghana will sell their produce in the international market below the agreed minimum price.