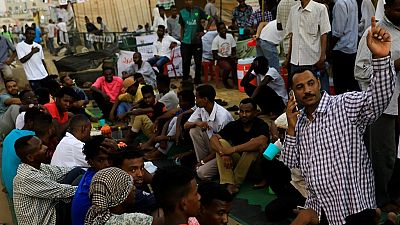 Sudanese protesters on Friday vowed to remain steadfast in their sit-in throughout the holy fasting month of Ramadan, with the help of volunteers who have been preparing the iftar meal for the demonstrators.

For Kwanja Edward, stirring a massive pot of porridge on a roadside in central Khartoum to feed protesters camping outside Sudan’s Defence Ministry is the best place to be during Ramadan.

Originally from South Sudan, the middle-aged nurse, who now lives in Khartoum’s twin city of Omdurman on the opposite side of the Nile river, said she had made her way to the capital because she wanted to do “what is best” for Sudan.

We are standing with our children, the protesters, demonstrators and fighters.

Like the many thousands who converged on the ministry on April 6, eventually forcing veteran autocrat Omar al-Bashir to resign, Edward has defied searing heat of up to 47 degrees as she and other protesters push the Transitional Military Council (TMC) to hand power to civilians.

“There is great cooperation between the protesters at the sit-in and those who arrive with food supplies, such as bread, dates, sugar, and things like that. This all comes from loyal, national efforts. So we do not need aid from foreign countries, or for foreign countries to come here and help us, or for a specific party to come and help us,” said protesters and volunteer, Dawood Ali.

Demonstrators say the food is largely acquired through donations and people bringing whatever they can afford when they come to the sit-in. Organisers said that several companies also provide bread, water and other basic items.

Before the evening prayer call, dozens of young volunteers lay out green mats and plates of fruit, dates and various stews as well as cups of juice and water.