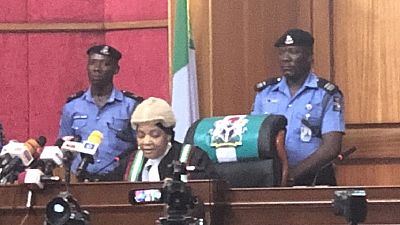 Five justices have been empaneled to oversee a presidential election petition challenging the March 2018 re-election of incumbent Muhammadu Buhari.

The petition was filed by Buhari’s main challenger in the vote and former vice-president Atiku Abubakar who run on the ticket of the main opposition Peoples Democratic Party, PDP.

The Pre-Hearing of the five member panel sitting at the Court of Appeal in Abuja was conducted today (May 8). The panel is headed by Justice Zainab Adamu Bulkachuwa, president of the Courts of Appeal.

The Gombe State – born judge will sit along with four men in the persons of Justices Abdul Aboki, Peter Ige, Joseph Ikyegh and Samuel Oseji.

The presiding judge stressed the mandates of the court chiefly amongst them the delivery of expeditious hearing into an election related matter as required by law.

Peter Obi, a former governor and vice-presidential aspirant of the PDP was present in court along with other party big wigs. The ruling All Progressives Congress, APC, has in their filings asked the court to dismiss the case for lack of merit.

Buhari who came to power in 2015 was adjuged winner of the 2019 vote which effectively secured him a second and final term in office. Nigeria has since 1999 had contested polls with Buhari failing to overturn previous defeats.

The most recent case of presidential results being overturned in Africa was over in Kenya where the Supreme court annulled the re-election of Uhuru Kenyatta in 2017. The Justice Maraga led court ordered a rerun which the main opposition boycotted. Kenyatta won a landslide despite low turnout.