Women in aviation use social media to inspire younger generation 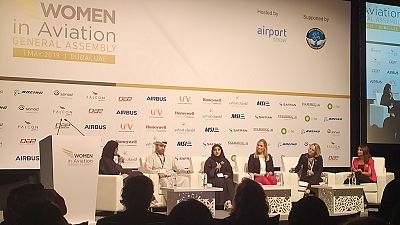 <p><strong>Women in aviation have resolved to use social media more regularly to inspire the younger generation of girls to consider careers in the industry. The discussions took place at the Women in Aviation conference on the sidelines of the Airport Show 2019, held on May 1 at the Dubai International Convention and Exhibition Centre in the United Arab Emirates, <span class="caps">UAE</span>.</strong> </p> <p>A panel, led by UAE’s first female aircraft engineer, Suaad Al Shamsi, agreed on the importance of representation concerning the future in Aviation Gender Equality. </p> <p>The panel noted that children and the young generation do not often aspire for careers in aviation because they either do not know that they exist, or they have not seen anyone to look up to in the various fields.</p> <p>Aircraft Engineer, Hend Alawadhi shared a compelling ordeal that exemplifies the challenges that women normally face while trying to break even in conventionally male-dominated fields. An aircraft she was in charge of delayed to take-off for two hours following a technical fault because the pilot wanted to work with the “real engineer.” </p> <p>Even after he was reassured that the engineer was already with him in the cockpit, he instead demanded for “a he not a she.” When he later budged – in the face of a standing order to either comply with her or exit the aircraft – he refused to communicate directly with her.</p> <p>Yet, in spite of such treatment, Eng. Alawadhi still exudes contagious enthusiasm about the vast opportunities for women in the aviation industry, though coupled with counsel.</p> <p>“I had to take on what no one wants in order to prove myself. Sometimes it is not given to you, it is grabbed. That is how I got where I am now,” she cautions, but not with restraint.</p> <h2 style="font-size:16px;"> More careers for women in aviation than cabin crew and pilot </h2> <p>The discussion also focused on the limitations often set for women in aviation. Previously, women were only expected to make the cabin crew. </p> <p>Today, this has expanded to include pilots and air traffic controllers (<span class="caps">ATC</span>). However, Eng. Suaad Al Shamsi decried the limited representation that remains to-date, “even on Google search engines.” </p> <p>A quick search will produce pictures of mostly men. That is why the panel, who all have thousands of followers on their individual accounts are taking to social media.</p> <p>Captain Feras Yousef Malallah, the only man on the panel, concurred that social media is key to make “people more aware of the aviation industry and the most effective way to reach anyone.” </p> <p>He added, “I am here to support ladies and any woman who has passion and to guide them.” And for those who struggle to communicate with the younger generation his advice was, “describe what you do in the simplest way you can. Teach them how to be there and how to reach there.”</p> <p>Lisa Holzman, Deputy General Manager <span class="caps">MSI</span> Air, highlighted the importance of using tools such as hashtags #ILoveMyJob or #WomenInAviation so as to reach the new generation. “They do not aspire because we do not show them,” she said.</p> <p>Kenya’s <a href="https://twitter.com/ms_koki/status/1025689406139719682" target="_blank"> Irene Koki Mutungi, </a> Africa’s first female Dreamliner captain, is a good example of aviation professionals using social media to tell the world about women in the industry.</p> <h2 style="font-size:16px;"> The future in Aviation Gender Equality </h2> <p>Pilot Salma Al Baloushi, also known as ‘the Amelia Earhart of the Middle East’ for being the first Emirati female pilot confessed that it is “hard and requires support from ones’ family and workplace. Being a mother is the hardest but is never an obstacle for you to succeed,” she asserted.</p> <p>For Cecilia Bengtstrom, an <span class="caps">ATC</span> Manager at <span class="caps">LFV</span> Consulting, “I am rather proud when I am showing myself through the aviation industry; that the gender perspective starts here. This industry is so exciting and it is growing and changing. Believe in yourself and be brave,” she added.</p> <p>“You might be the one to open doors for others, there is more you can do. I have always wanted to be an astronaut but was not brave enough to tell people,” said Eng. Alawadhi.</p> <p>The Women in Aviation conference attracted at least 600 participants, according to the organisers, one of the highest attendances at the three-day Airport Show 2019.</p> <p>And following the call, I also uploaded <a href="http://hotsta.net/media/2037874763020744805_6930632105" target="_blank">this selfie. </a> on my Instagram account.</p> <a href="https://twitter.com/ameliamartha1" class="twitter-follow-button" data-show-count="false">@ameliamartha1</a><script async src="//platform.twitter.com/widgets.js" charset="utf-8"></script>

I had to take on what no one wants in order to prove myself. Sometimes it is not given to you, it is grabbed. That is how I got where I am now.